Seth Meyers rips 'superficial' Trump's 400-pound hacker claim: 'He fat-shamed a dude he just made up' 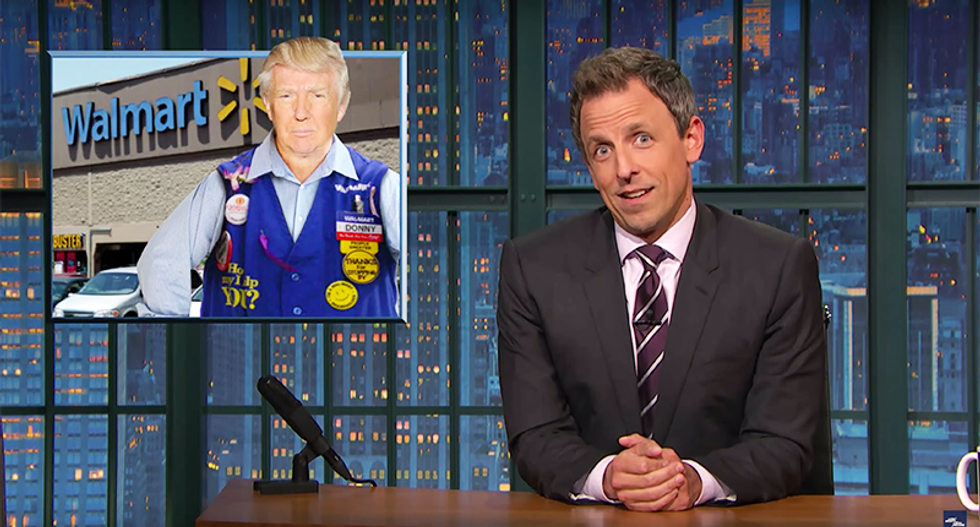 After a full day of debate spin from both sides, "Late Night" host Seth Meyers seemed just as embarrassed for Republican candidate Donald Trump's post-debate excuses as he did for Trump's poor performance on Monday.

The comedian began his "Closer Look" segment talking about the unequal standards forced on Democratic candidate Hillary Clinton. He played a clip of conservative commentator Hugh Hewitt, who explained that Clinton couldn't cough, laugh, speak over, shout or be condescending.

"Basically, she has to act like a ninja bank robber weaving through a grid of red lasers," Meyers noted. "Meanwhile, Trump just has to be a C+ Walmart greeter."

Trump's own supporters and pundits set expectations for both Trump and Clinton, "all Trump had to do was be a normal person and he would have been declared the winner," Meyers said. "Yet he still managed to lose. Even Fox News had to glumly admit that he lost. Although, they did have plenty of excuses."

Meyers played a clip of Fox News commentators proclaiming that if he was as good throughout as he was in the first 20 minutes, he would have won. Others celebrated and claimed victory, saying that the only thing people care about is the first 30 minutes anyway. Former Speaker Newt Gingrich called Clinton "mean, nasty, personal" and others claimed she was "smug" and "not attractive."

"Gee! She didn't look attractive?" Meyers wondered. "Last night, Donald Trump's face looked like someone was making a fist inside a sock-puppet!"

The one thing Trump kept falling back on was his buddy Sean Hannity, if only someone would just call him. Meyers showed a clip of every time Trump mentioned Hannity's name, showing just how desperate Trump was for someone, anyone, to call Sean Hannity. "He sounds like a Jewish mother trying to set him up on a date," Meyers said.

The second the candidates were off stage they ran to their loved ones — Clinton to her daughter Chelsea and Trump to Hannity. Coincidentally enough, Hannity turned out to be one of the few who actually thought Trump won the debate. Trump adopted the Hannity spin and spent the day claiming he won the debate based on internet polls. In an interview with Fox News, Trump named off TV networks, like CBS, where he claimed he won polls, one of which was certainly news to CBS. Chief White House correspondent Major Garrett tweeted out that CBS News never did a post-debate poll.

Trump, on the other hand, wasn't exactly prepared for the "most important 90 minutes of his campaign," Meyers continued. The results were bizarre tirades on terrorism and claimed Clinton is revealing strategy to the enemy. "No wonder you've been fighting ISIS your entire adult life," Trump said.

"That's right, she's been fighting ISIS her entire adult life," Meyers said with a dead-pan. "Which lead to this fact check from the Associated Press, one of the better fact checks in history. 'Hillary Clinton was born in 1947 and is 68 years old. She reached adulthood in 1965. The Islamic State group grew out of an al-Queda spinoff, al-Queda in Iraq in 2013.' Although, I guess it's not surprising someone had to explain to Trump when adulthood begins, since he still hasn't reached it," Meyers slammed.

The other strange shot on foreign policy was the allegation that cyber warfare was actually coming from "somebody sitting on their bed weighing 400 pounds," and not Russia, as Clinton and intelligence officials believe. "Wow, Trump is so superficial he even fat-shamed a dude he just made up," Meyers said, shaking his head.

One of the most epic parts of the segment was when Meyers took the actual words that Trump said with regard to cyber warfare and read them aloud. It was like the moment Tina Fey reenacted the notorious Katie Couric interview but didn't have to make up any additional statements. It made Trump sound like "Lenny Brisco from 'Law and Order' 20 years ago," Meyers said.

The major moment that didn't get a lot of play yesterday was when Trump admitted that he pays no federal income tax. Instead, he interrupted Clinton claiming he's "smart" for not paying any and even if he did the money would be "squandered."

"Oh, the government would squander your money?" Meyers asked. "Says the guy who covers his penthouse in gold like an old prospector who just won the lottery."

The "it would be squandered" part was shocking. "In the end, even if you're a Trump supporter, you have to admit that last night wasn't a great night for the GOP nominee," Meyers proclaimed.