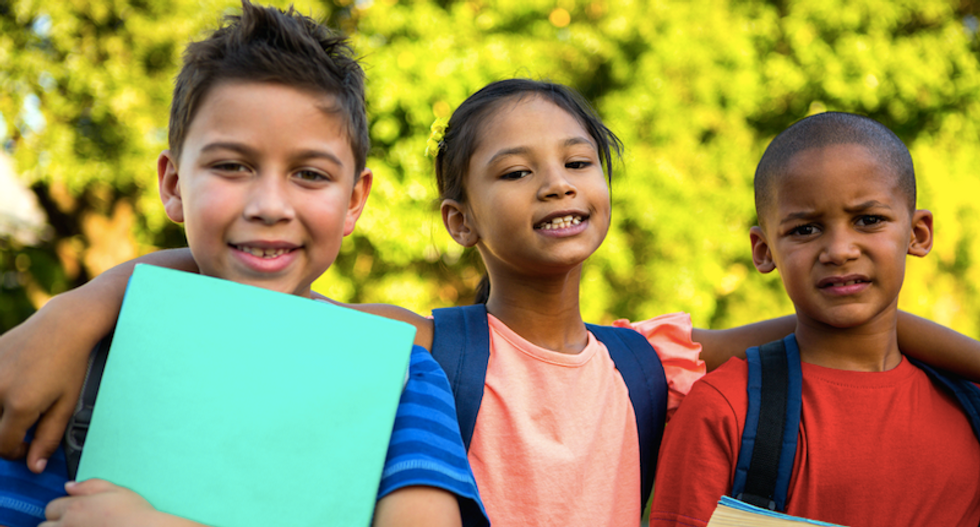 Students with their arms around one another (Shutterstock)

A Texas teacher claims she had no idea she'd chosen a misspelled racial slur to nickname one of her racially mixed classes.

The white teacher gave each of her sixth-grade classes a nickname and laid out a set of goals for students at Bell Manor Elementary School in suburban Fort Worth, reported KDFW-TV.

A parent said he learned his son's class had been nicknamed the "jigaboos," although the teacher misspelled the racial slur for black people, when he asked about his child's day at school.

So the father, who asked to remain anonymous in the TV report, went to school and photographed the laminated sign, which read: "Mrs. _______'s Jighaboos are at school today to achieve our 6th grade goals and prepare for 7th grade."

“She makes them recite that out loud,” said the father, who is white.

Neither the TV station nor the Dallas Morning News identified the teacher in their reports.

Other classes were given less insulting nicknames, the father said, and one class was given the flattering "Dream Team" moniker.

“You put Dream Team, and then you have the Jighaboos," the father said. "Really? Really with that? That’s -- that’s unacceptable."

The comparative racial mix for each class wasn't clear from reports, but the most recent U.S. Census found Bedford is about 81 percent white, 13 percent Hispanic and 7 percent black.

Officials from Hurst-Euless-Bedford Independent School District said they had apologized to the father who photographed the sign, which they agreed was not appropriate for school use.

"[We] would like to extend an apology for the inappropriate actions taken by one of our elementary teachers who failed to vet a class name," district officials said in a statement. "We take this situation seriously and the issue was immediately addressed with the principal and classroom teacher. Both the principal and the teacher have apologized to the parent reporting this concern."

Officials told the father the teacher was unaware she'd chosen a racial slur to nickname some of her students, but the man said that explanation was pretty lame.

"Ignorance is not a defense," he said.