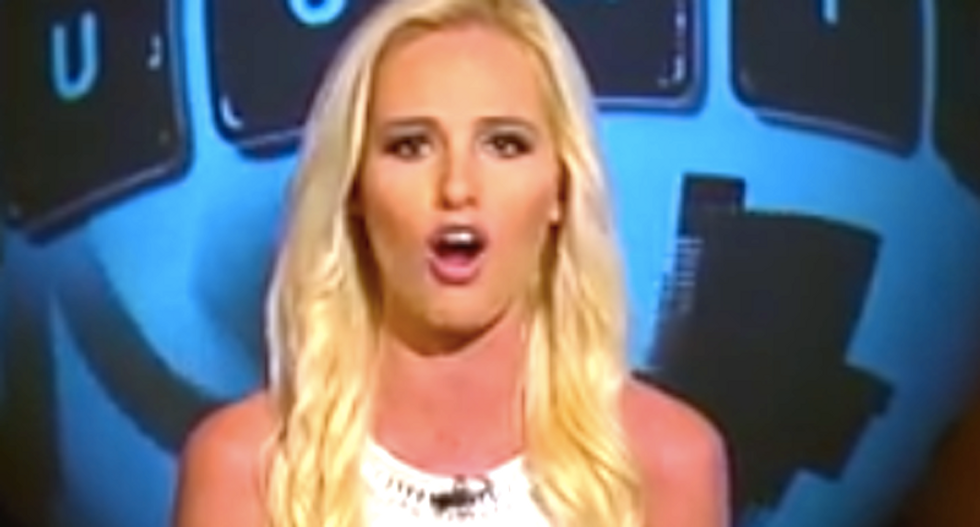 "No, it does't mean that those of us who say it, wear it or tweet it don't believe America is great," she said. "No, quite the opposite. We love this country and want to see it flourish. We do believe it is in danger, though."

Lahren said eight years under President Barack Obama couldn't destroy the United States, but she worried that Hillary Clinton might be accomplish the impossible in just four years.

And then, as if some unseen hand pulled a string in her back, Lahren clunkily rattled off a list of conservative jibber-jabber like Sarah Palin in a speed-reading contest.

"It means an end to crippling regulations like Obamacare that only burden small business owners and bury us in red tape," she said in her left-footed, staccato style. "It means American energy independence and jobs for oil, coal, steel and factory workers."

"It means a secure border where illegal immigrants are held responsible for their actions and not placed on some kind of a pedestal with perks and amnesty bubble wrap, while hard-working Americans foot the bill and deal with the consequences," she said, snarling a little. "Also, Democrats can rake in more votes."

"It means working hard not to be well-off, but better off, not asking for free things but earning your way and not getting taxed out of house and home because of it," Lahren continued, out of breath.

"Make America great again means a military fighting force able to operate without the shackles of a half-baked, no-strategy strategy," she said, vibrating with rage. "It means sending our men and women into battle like the warriors they are, not the sitting ducks Obama has forced them to become. It means the American reputation of kicking ass and taking names, not coddling radical Islamic terrorists here and abroad in an endless war against an enemy our president refuses to name or offend."

Then she started to sound like white nationalist William Johnson, the former Trump delegate who said America would be great again when white people could make racist statements without fear of consequences.

"It's the belief that all lives matter, and the right to say it without being labeled a racist," Lahren said. "Make America great again means being able to say 'God bless America' loudly and proudly. It means standing for the anthem and saluting the Stars and Stripes. It means America first -- its faith, its family, its freedom."

"So the next time you hear 'make America great again,' don't get it twisted," she said. "I love my country -- do you?"