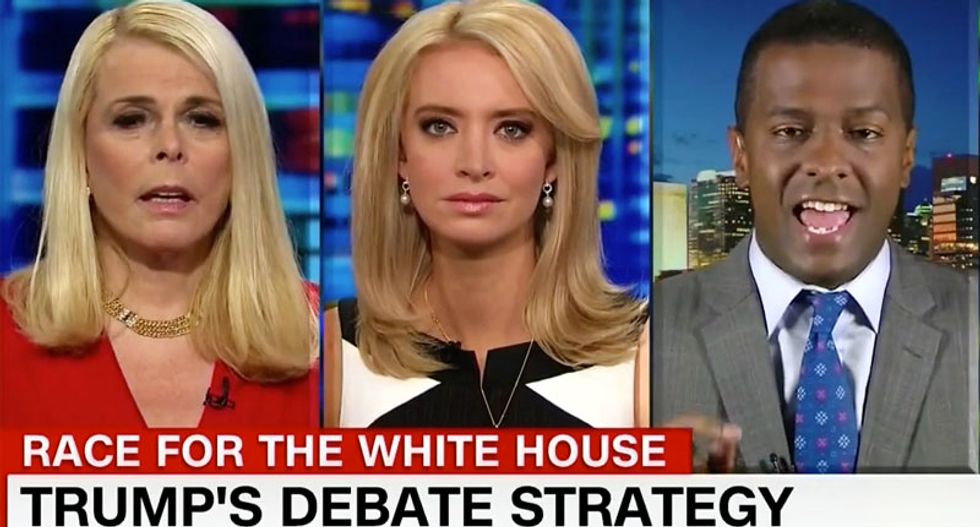 In a presidential campaign that has seen surrogates for GOP nominee Donald Trump offer commentary that can charitably described as bizarre, former New York Lt. Gov. Betsey McCaughey set a new standard -- or low -- during an appearance on CNN, Wednesday night.

Touching on the subject of weight, in light of Trump's shaming insults directed at a former Miss Universe, McCaughey attempted to make the case that Clinton should apologize for an ad showing girls looking into a mirror as Trump insults towards women are heard.

"I'm a mother, I have three daughters and two granddaughters, and we have been through the whole gamut of the issue that Hillary Clinton is now featuring: the weight issue," McCaughey pontificated. "Gaining weight or, on the other hand, eating disorders. She brought it up at the debate when she mentioned Miss Machado, and of course she's running ads that shows young girls uncomfortably, painfully looking in the mirror."

"This to me is very disturbing, " she continued. "I have actually sat at the bedside of a child very close to death. And families like mine that have suffered so much on this issue are appalled that Mrs. Clinton is exploiting this into a political issue."

At this point, commentator Bakari Sellers had heard enough and jumped in.

"Whoa , whoa , whoa, whoa, " he said with a half-smile. "No, no, no, no, no. But if you are appalled by that and you still support Donald Grump, that's some personal issue that you have."

McCaughey tried to talk over Sellers, who shot her down  -- and then he shot Donald Trump down.

"The fact is, she's not just running an ad with women looking in a mirror," he explained. "They're staring at a mirror with the words of Donald Trump playing over them. It's the words that come out of his mouth. It's the misogyny that comes out of his mouth. It's nothing more, it's nothing less. And if you want someone to stop making it an issue , tell Donald Trump to stop talking like that! "

"You can't paint this picture of Hillary Clinton being despicable, when it's Donald Trump's own words," he said before the panel started talking over each other as Trump advocate Kayleigh McEnany sat staring blankly at the camera -- apparently wanting no part of it.