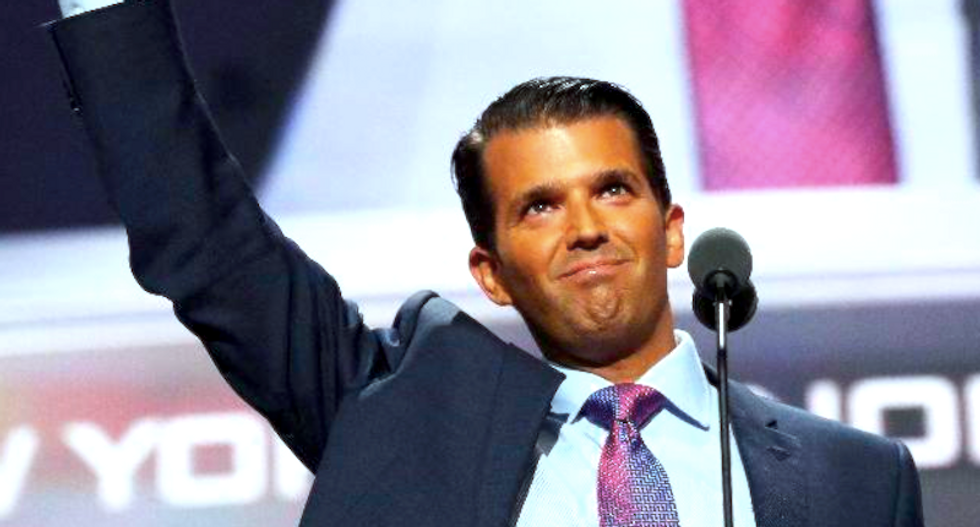 Donald Trump Jr. drew widespread condemnation for comparing Syrian refugees to poisoned candy -- but his analogy isn't a new one, and it's based on two separate white supremacist memes with roots in Nazi propaganda.

Trump -- the Republican presidential candidate's eldest son and a top campaign surrogate -- tweeted the image Monday evening in an apparent response to the dumpster bombing over the weekend in New York City, which his dad inaptly linked to the refugee crisis.

“This image says it all," reads the text. "Let’s end the politically correct agenda that doesn’t put America first. #trump2016,″ accompanied by the official Donald Trump/Mike Pence campaign logo and slogan. The analogy isn't new, and has been used for years by white supremacists to overgeneralize about various minority groups. "It is often deployed as a way to prop up indefensible stereotypes by taking advantage of human ignorance about base rates, risk assessment and criminology," wrote Emil Karlsson on the blog Debunking Denialism. "In the end, it tries to divert attention from the inherent bigotry in making flawed generalizations." A spokeswoman for Wrigley Americas, which makes Skittles, whacked Trump's dehumanizing comparison. "Skittles are candy. Refugees are people. We don't feel it's an appropriate analogy," said Denise Young, vice president of corporate affairs. "We will respectfully refrain from further commentary as anything we say could be misinterpreted as marketing." Joe Walsh, a single-term congressman from Illinois and now a right-wing talk radio host who's been booted from the airwaves for using racial slurs, bragged that Trump's meme was nearly identical to one he had tweeted a month earlier.

The analogy, which has been used on message boards and shared as social media memes, originally used M&Ms as the candy in question -- but that changed after George Zimmerman gunned down Trayvon Martin while the unarmed black teen was walking home from buying a drink and some Skittles.

A Google image search of "skittles trayvon meme" reveals a horrible bounty of captioned images mocking the slain teenager, whose killer was acquitted after claiming self-defense under Florida's "stand your ground" law.

But the poisoned candy analogy goes back even further, to an anti-Semitic children's book published by Julius Streicher, the publisher of the Nazi newspaper Der Stürmer who was executed in 1946 as a war criminal.

The book tells the tale of "the poisonous mushroom," and was used to indoctrinate children in hate.

Edit: A previous version of this story found only three different ways Trump Jr.'s tweet was racist, but it has been updated to include historic references to Nazi propaganda.