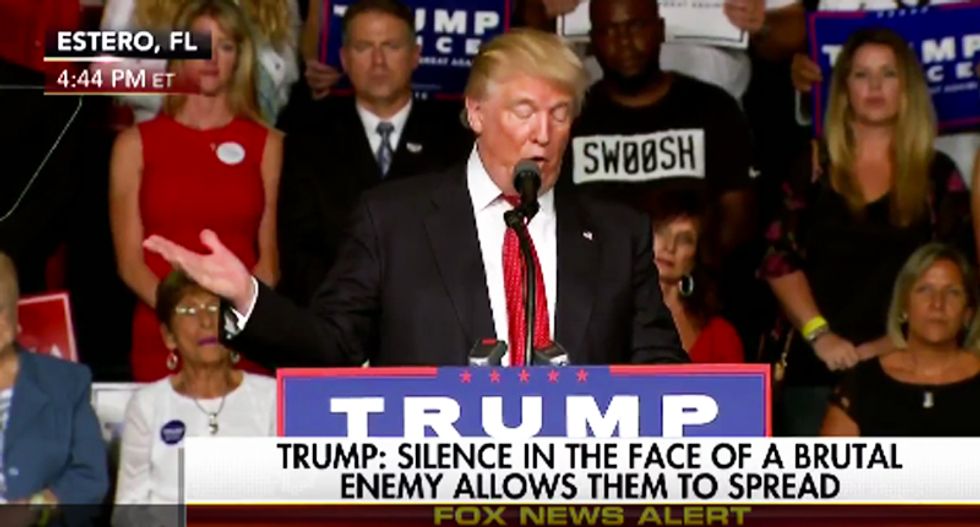 GOP Presidential nominee Donald Trump used a scheduled campaign stop speech on Monday to go off-script and deliver a volatile diatribe on the New York bomber, only to segue into a dramatic reading of the lyrics to a 1968 soul hit.

One moment Trump was calling for NY bomber Ahmad Rahami to be tried immediately only to turn around and say he should be held indefinitely and treated as an "enemy combatant." At other times, Trump complained that Rahami was being taken to a hospital for his wounds where he would be given "room service" and an "outstanding lawyer."

Amidst all of that, while blaming the immigration policies of President Barack Obama and former Secretary of State Hillary Clinton for naturalized citizen Rahami, Trump once again did an over-the-top reading (see video below) of the lyrics from Al Wilson's "The Snake" to a clearly delighted -- and rabid -- crowd.

This is the part of the Trump speech when I usually start punching myself in the face to numb the pain in my ears.
— Kaili Joy Gray (@Kaili Joy Gray)1474317833.0

the most surprising thing about Trump using the story of The Snake is that I'm far more used to hearing anti-semites use it to refer to Jews
— maura quint (@maura quint)1474321469.0