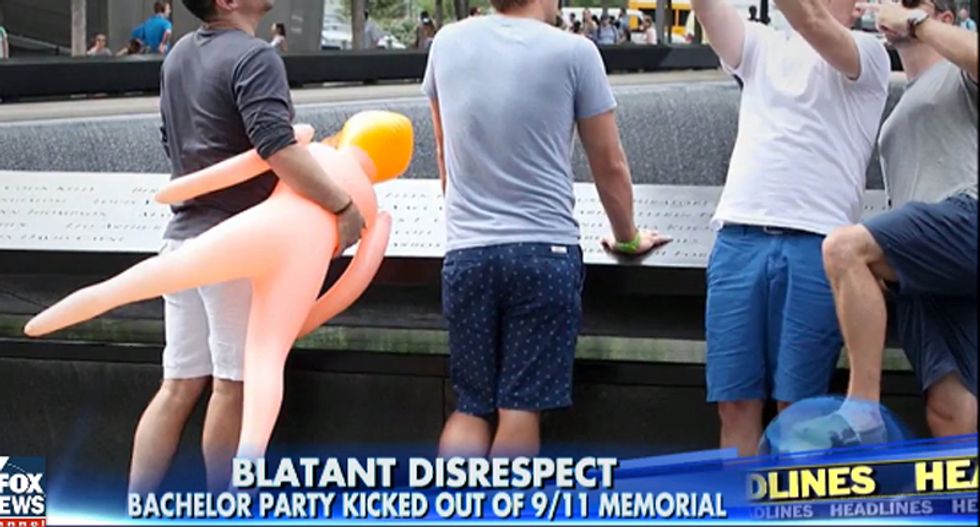 On the eve on the 15th anniversary of 9/11 attack, police in New York city had to step in on Friday when a group of men took stag party selfies with a sex doll at the Ground Zero Memorial.

According to the Daily Mail, the unidentified men were British, with one source saying three of them work for a Wall Street bank.

In photos taken at the scene, one man carried the inflatable sex toy while his friends posed for photos in front of one the memorials waterfalls until police officers stepped in and asked them to leave the area.

Asked what they were doing, one man believed to be the groom, said "it's just a bachelor party," but then answered "no comment' when pressed for more information.

According to Rosanne Hughes of the New Jersey 9/11 Memorial Foundation -- and who lost her 46-year-old husband on 9/11/2001 -- she was disgusted by their callousness.

"I'm speechless. I don't even have any words for that - that's a disgrace," she said. "That is sacred ground, I lost my husband and I don't even know what to say - it's disgusting."

"We hear things like this and I honestly think it's disgraceful to take selfies of anybody there laughing and smiling when they haven't lived the life we've lived for 15 years and the people we've lost," she continued. "If I came face to face with these people I would say 'shame on you. You have no clue to what those families have gone through and to be that disrespectful' - they should be fined. They shouldn't be allowed to get away with that."

Shown photos of the revelers, Michael Frazier, the executive vice president of communications and marketing at 9/11 Memorial and Museum, called their behavior "disturbing."

"This image is exceptionally disturbing and what is just as disturbing - if not more - is that these people find it appropriate to blatantly disrespect this place made sacred by the murder of 3000 innocent people," he said before adding, "At any time this would be enraging and offensive, we are days away from commemorating the 15th anniversary of 9/11 - this is disgusting. I have never seen anything like this or expect to see anything like this - not even remotely close."

According to Frazier, the memorial site has rules on conduct posted encouraging visitors to exercise "proper decorum, personal behavior and conduct at all times."

Watch video from Fox News below: