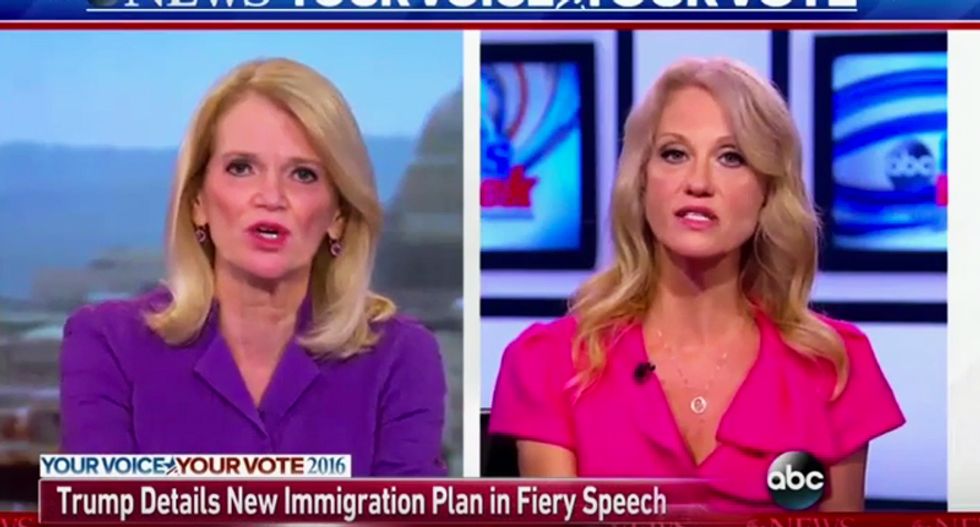 The latest campaign manager for GOP presidential nominee Donald Trump did all she could Sunday morning to avoid answering whether the candidate will attempt to deport the estimated 11 million undocumented immigrants should he become president.

Appearing on ABC's This Week, new campaign head Kellyanne Conway kept smiling and tap-dancing around the sticky question of  deportation -- insisting that an estimated one to two million "criminals" would be the first to go -- but stopped short of answering host Martha Raddatz's questions about the overall plan.

"He said that the priority will be criminals and those who have overstayed their visas," Raddatz asked. "That still amounts to between 5 million and 6.5 million people that he says will be quickly removed. The cost estimate for that is between $51 billion and $67 billion. How will he manage such a massive operation and who will pay for it?"

"He'll manage it the way it should have been managed all along, by enforcing the law and relying upon those law enforcement officers and those ICE officers to do their job," Conway replied. "They've been completely hamstrung in their ability to do their job. He also has -- said that he will triple the number of ICE agents to try to help."

"If they're criminals, they're going immediately. And we don't know what that number is. We hear anything from 1 million to 2 million," Conway parried. "And then, of course, he has also said, this being the most generous country to immigrants in the world, that if you want to come to America and immigrate here legally --"

Raddatz then cut her off.

"And if they're not criminals, that has been very clear. He's talked about the criminals. But if they aren't criminals, do they have to go?" she asked.

"He has said that you should stand in line and immigrate legally," Conway replied. "And also he has said that once we do things that have never been done --"

Raddatz cut her off again, asking,  "So you mean they have to go?"

After Conway fumbled around and didn't address the question the ABC host scolded her, "OK. But that really doesn't clear it up, Kellyanne."