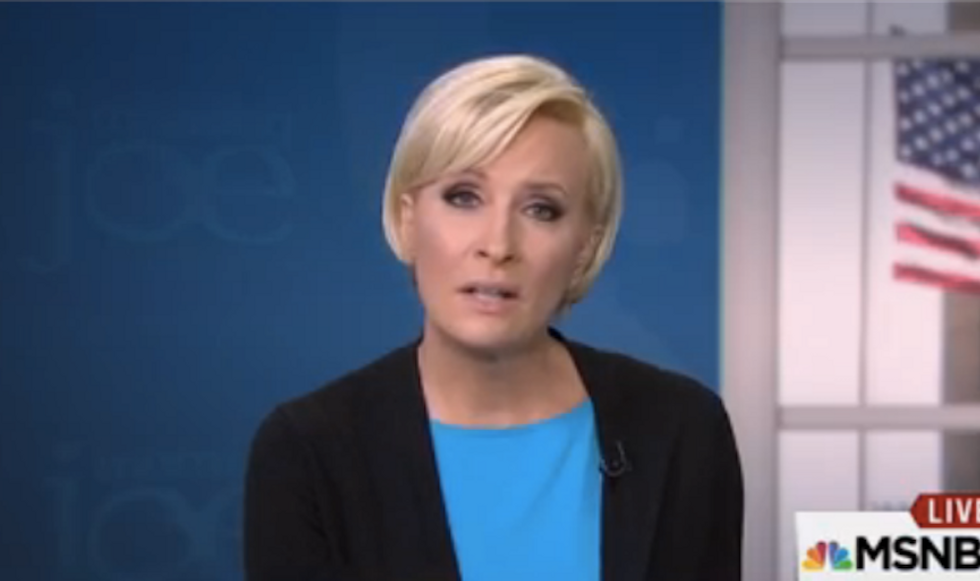 On Friday's edition of MSNBC's Morning Joe, co-host Mika Brzezinski marveled at the amount of false statements made by Republican presidential nominee Donald Trump, lamenting that the air is so thick with lies now that it's almost impossible to fact check them all.

Brzezinski played a clip of Hardball's Chris Matthews interviewing former New York City Mayor Rudy Giuliani (R) on the topic of Pres. Barack Obama's citizenship. Donald Trump has yet to recant his "birther" stance -- the assertion that Obama was born outside the U.S. -- but Giuliani repeatedly insisted that Trump has acknowledged that our current president is a legitimate U.S. citizen who was born in Hawaii.

Commentator Donny Deutsch said, "Rudy Giuliani, in my mind, is unhinged. My mother who's 80 lives in a beautiful place called Boca West down in Boca Raton, Florida, and there are some vacancies there and I think Rudy Giuliani should look into going down there because he's not well. You watch that interview -- and Chris did a great job -- and you can see that that man is just not well."

One panelist said, "We have to make up a little card and pin it to his sleeve that says, 'My name is Rudy and I live in condo 3A at Boca West.'"

Brzezinski said that Trump's running mate, Gov. Mike Pence (R-IN) has come out and acknowledged the president's birthplace, but Trump has only said, "I don't even talk about it anymore."

She played video of Democratic nominee Hillary Clinton from Thursday night, saying, "We are facing a candidate with a long history of racial discrimination in his business, who traffics in toxic conspiracy theories like the lie that Pres. Obama is not a true American."

Brzezinski said that the press' job during times like this "is to state facts. At this point, I'll go on the record and say there are so many lies that this candidate just throws out there right and left, just at his whim, seemingly for fun, to make it part of a riff. And I do think that at this point he has failed. He has failed any test in terms of being able to cover him as a legitimate, credible candidate."

Chuck Todd said that there are so many lies "that when you cover one, there's six left uncovered. You can't debunk the lies as fast as he's telling them sometimes."

At what point, Todd asked, do people stop taking Trump at his word and just assume that he's lying?

"Ultimately," said Todd, "it's going to backfire on him."

"The fact remains that he never stepped up," Brzezinski said. "He only doubled down. He hasn't even tried to think about what impact he might be having on this country or that he could have. He hasn't tried to educate himself. He hasn't tried to tell the truth. He's still doing a reality show and having fun on his whim and laughing."

"It's not funny," she concluded.