WATCH: Don Lemon opens up at can of whoop-ass on Corey Lewandowski over Trump's fake black outreach 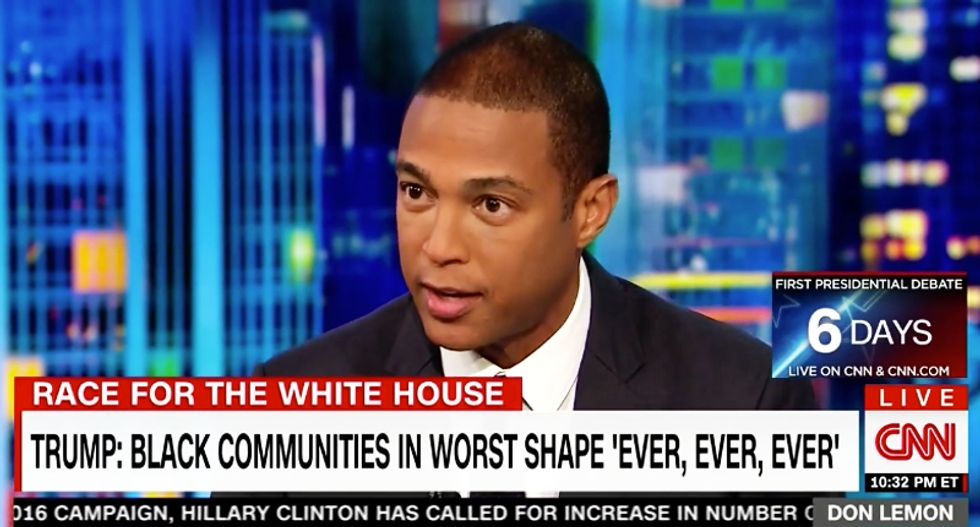 Tuesday night, CNN host Don Lemon gave former Donald Trump campaign manager Corey Lewandowski a lesson in black history as well as some stern advice for his boss when it comes to speaking to black voters.

After panelist Peter Beinart ridiculed Lewandowski's defense of Trump's comment that black communities are "absolutely in the worst shape that they've ever, ever, ever been in before," the Trump advocate said it was "a fact."

Lemon shut him down, saying, "As a person of color who has lived the last fifty years in this country, things have never been better for African-Americans."

Later, after Lewandowski attempted to deflect from Trump's racism by saying he has African-Americans working for him, Lemon took the former campaign manager -- along with his boss -- to the woodshed.

"Then why doesn't he ask those African-American friends why the words he uses are so insulting?" Lemon asked. "Because I'm sure they would tell him, if they were indeed his friends, if they were indeed employees who weren't afraid of him and of losing their jobs. They would sit down and say, 'listen Mr. Trump, what you're saying is insulting, and I know you're not talking to me, you're talking at me. And I know that you're not actually reaching out to me, you're reaching out to make other people more comfortable with voting for you.' That's what I would say to him as someone who has given him a chance and has interviewed him more than eight or nine times."

"And if he, as a candidate for president of the United States, doesn't understand that, then he doesn't want to represent all of the people in this country."