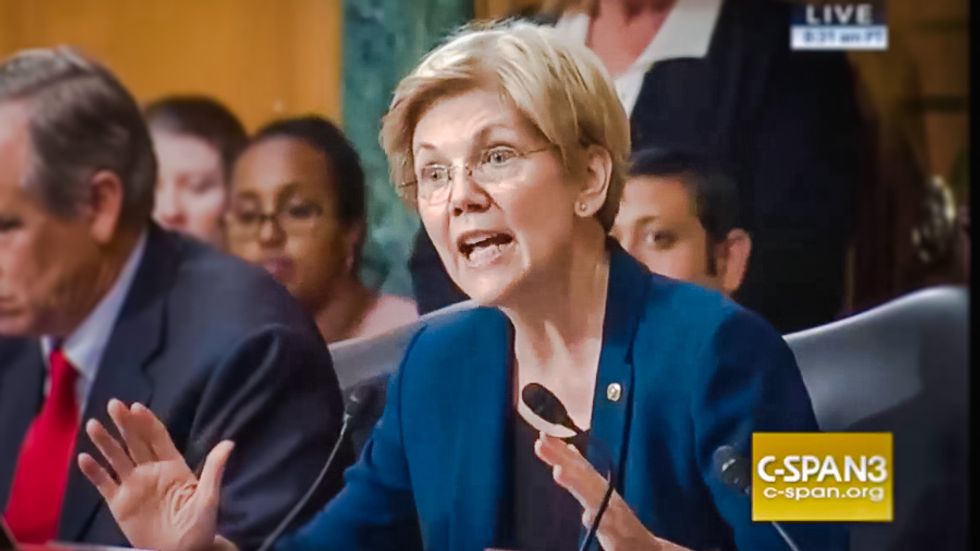 Massachusetts Sen. Elizabeth Warren (D) lashed out at Wells Fargo CEO John Stumpf on Tuesday over the bank's practice of opening phony accounts, which cheated customers out of fees while seeing Stumpf's personal wealth increase by hundreds of millions of dollars.

During testimony to the Senate Banking Committee on Tuesday, Stumpf said that he was "deeply sorry" that employees of the company had opened unauthorized accounts -- but he denied that the practice had been a "scheme" to inflate the stock price.

Wells Fargo announced earlier this month that it had fired over 5,300 employees for moving customers' money without authorization to create phony accounts, which allegedly pumped up the company's stock price.

At a hearing on Tuesday, Warren hammered Stumpf for blaming low wage employees instead of taking personal responsibility.

"You haven't returned a single nickel of your personal earnings, you haven't fired a single senior executive," Warren explained. "Instead, evidently, your definition of accountable is to push the blame to your low-level employees who don't have the money for a fancy PR firm to defend themselves."

"It's gutless leadership," she charged. "Cross-selling is all about pumping up Wells' stock price."

Warren went on to confront Stumpf with his own quotes from his pitches to investors and analysts.

"Do you know how much your stock holdings in Wells Fargo gained while this scam was underway?" the Massachusetts senator asked.

"It was not a scam," Stumpf insisted. "And cross-sell is a way of deepening relationships."

Warren cut him off: "We've been through this, Mr. Stumpf. I asked you a very simple question. Do you know how much the value of your stock went up while this scam was going on?"

Stumpf refused to answer the question, but Warren was undeterred.

"The share price during this time period went up by about $30," she noted. "Which comes out to more than $200 million in gains. All for you personally, and thanks in part to those cross-selling numbers."

"When it all blew up, you kept your job, you kept your multi-million-dollar bonuses and you went on television to blame thousands of $12 an hour employees who were just trying to meet cross-sell quotas that made you rich," Warren asserted. "You should resign, you should give back the money that you took while this scam was going on and you should be criminally investigated by both the Department of Justice and the Securities and Exchange Commission."

Warren concluded by observing that Wall Street bankers had continually escaped jail time for bad behavior since the devastating 2008 recession.

"The only way that Wall Street will change is if executives face jail time when they preside over massive frauds," she said. "We need tough new laws to hold corporate executives personally accountable, and we need tough prosecutors who have the courage to go after people at the top."

"Until then, it will be business as usual. And at giant banks like Wells Fargo, that seems to mean cheating as many customers, investors and employees as they possibly can."