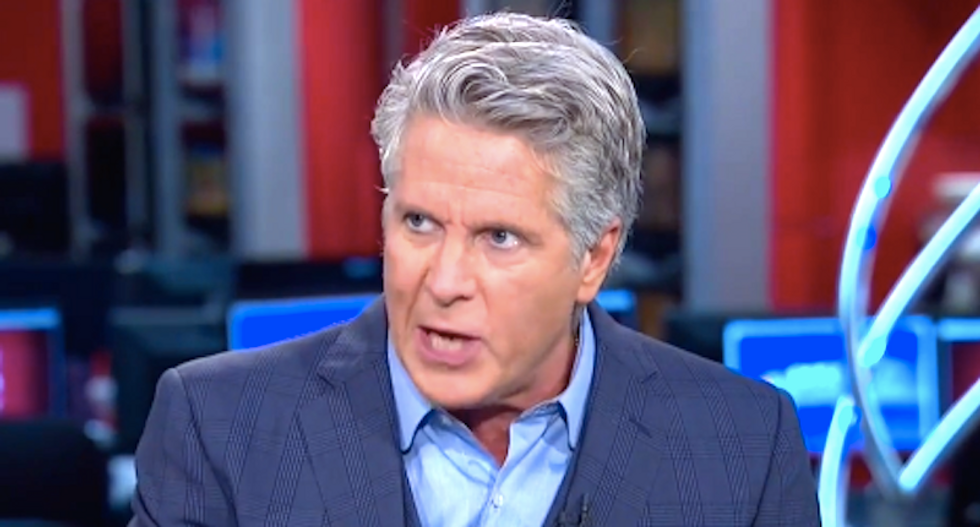 A panelist on MSNBC's "Morning Joe" delivered a righteous, "mad as hell and not going to take this anymore" rant about the insipid media coverage of Donald Trump's scandalous foreign entanglements.

A bombshell Newsweek report revealed the extensive ties between the Trump Organization and investors closely tied to foreign governments -- which could potentially pose a national security conflict, if Trump was elected -- and MSNBC's Mika Brzezinski expressed doubts about the Republican candidate's ability to show the proper character to serve as president.

"Do you think Donald Trump, who is literally baited by a tweet or baited by something like a morning show host says on TV, do you think he has the self-discipline to separate when someone has actually given a great deal of money to his organization or they have some major deal, do you think he's going to be able to put that out of his head and govern effectively and be a real leader?" Brzezinski said. "Who do you think has the capacity to separate in their minds and do the right thing?

Panelist Donny Deutsch said the revelations completed undermined the foundation of Trump's campaign -- which he pointed out had focused its attacks on Clinton's ties to "the establishment-industrial complex" and her alleged conflicts of interests.

"He trumps her, no pun intended, in those categories 10-to-1," Deutsch said. "Every business dealing we look at of him is either dark or murky or sleazy -- every single one. Yet the press, it's so ironic how the press is painted as left-leaning. I think in a lot of ways, other than the Washington Post (and) New York Times, (the press) gives him a pass. Going back to the tax returns, people should not let up. They don't let up on Hillary's emails, people should not let up on these issues, those 500 entities that Kurt Eichenwald was talking about (in Newsweek)."

Panelist Mark Halperin, the co-managing editor of Bloomberg Politics, said the revelations were troubling, but he was even more troubled by the prospect of foreign investments potentially disqualifying business leaders from running for president.

Mike Barnicle, the freelance columnist and MSNBC analyst, said Trump must convince voters he can disentangle himself from those murky foreign investments, and Halperin said the GOP candidate had already promised to do so.

"Let's go back to tax returns," Deutsch interjected. "Why does this man not have to do what every man or woman who's run for office (has done)? Why is he held to a different standard? Why? Tax returns -- that shows how you've lived your life as an American, how you've lived up to your responsibilities, and how, day after day, every media outlet does not pound, pound, pound. You are running for president of the United States -- how dare you say we're not going to see your tax returns. How dare you insult the American public because you're 'in audit.'"

"This is the reality of it," Steele said. "You're exercised, the press is exercised -- but the American people apparently aren't. Show me the poll where 60 percent of the people are saying, 'I want to see your tax returns.' That's Donald Trump's safe haven here. He's so past that at this point, it's not resonating the way it's resonates for you with a lot of other people. That's why you don't see the pressure on him."

That poll, which was conducted last weekend, shows four in 10 Ohio voters are "bothered a lot" by Trump's refusal to release his tax returns.

But another poll, conducted nationally late last month by Quinnipiac University, found that 74 percent of all voters think the real estate developer and former reality TV star should release his tax returns.

Someone might want to point out to Steele that 62 percent of Republican voters surveyed in that poll would like to see Trump's tax returns.