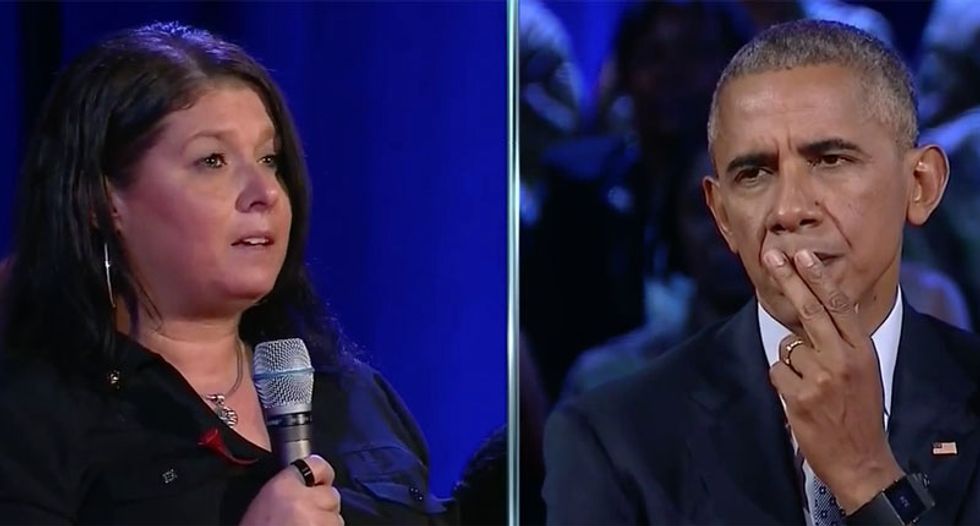 Tuesday night, in the midst of President Barack Obama's CNN town hall in front of military members and family at Fort Lee, the wife of a soldier who committed suicide because he feared the stigma of PTSD made a heartbreaking plea to the president for help for vets.

Introduced by host Jake Tapper as Amanda Souza, a Gold Star wife and a Blue Star mom, Tapper explained "her husband was a 25-year-veteran who suffered from post-traumatic stress and committed suicide last year. She created a foundation and is honored to help other veterans, servicemen and women and their families improve their lives. Her son is an active duty Marine."

Holding the microphone, and on the verge of tears, she spoke to the president with a quavering voice asking for help.

'Throughout my husband's military career, he spent a lot of time overseas, many deployments," she began. "And very, very dangerous missions. Unfortunately on his last deployment, they were under enemy attack and not everyone made it."

"The things that my husband had to go through, he had to live with when he came home," she continued. "He was diagnosed with PTSD but, unfortunately, like many of servicemen and women, this was his career, this was his livelihood and he was too scared to go get help because he did not want to risk being labeled as unstable or weak. Unfortunately he did not get the help that he needed. He had a family to support and he ended up joining the ranks of the on-average 22 vets a day who commit suicide."