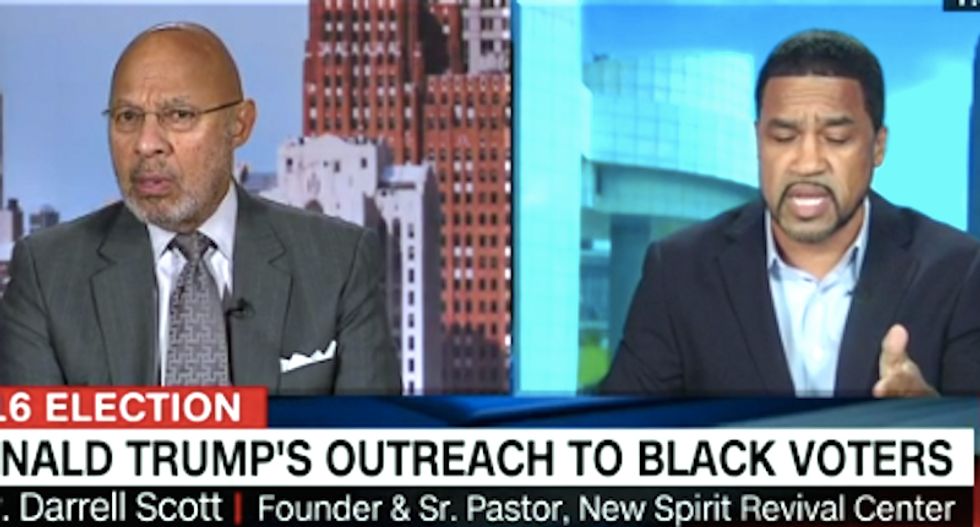 Darrell Scott, pastor of New Spirit Revival Center in Cleveland, promoted Trump's black outreach Friday morning on CNN's "New Day," saying the Republican candidate was trying to appeal to voters by pointing out the problems in their communities and then promising to fix them.

Dennis Archer, a former Michigan Supreme Court justice who served as Detroit mayor from 1994 to 2002, said he agreed that voters should pay attention to candidates who promise reform -- but he disputed Scott's characterization of his hometown.

The two men argued back and forth until co-host Alisyn Camerota asked the former mayor to let the pastor continue his statements.

"You have someone saying, 'I'm going to be put in a position to help Detroit in the areas that it most needs help,'" Scott said -- and then things got weird.

"He bailed out the auto industry," Scott claimed, inaccurately, as Archer reacted in puzzled surprise.

In 2008, Trump was a Hillary Clinton supporter and star of the NBC reality TV show "The Apprentice."

Archer then reacted as if someone had detonated a stink bomb in the TV studio, and Scott continued juggling his flamingly fact-free talking points.

"He wants to do that by curbing these imports," the pastor said.