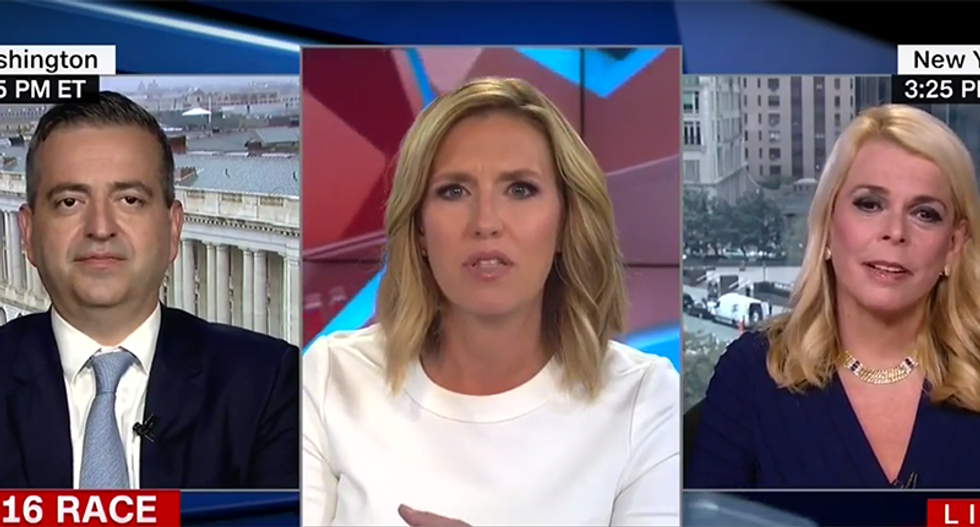 In a strange turn of events, a surrogate for Republican presidential candidate Donald Trump attacked Democratic candidate Hillary Clinton for her recent ad, which features young girls watching videos of Trump's comments about women. Curiously, she tried to turn Clinton into a body-shamer for highlighting Trump's body shaming of other women.

When asked if she got the recent talking points the Trump campaign handed out instructing surrogates to push former President Bill Clinton's extra-marital affairs, Betsy McCaughey admitted she hadn't yet read them. When asked about the strategy of going after Mrs. Clinton for her husband's infidelity, she admitted she doesn't want either candidate to exploit women in their campaigns.

"The worst of all, I find, is those little girls in Mrs. Clinton's television ad, the nameless little girls standing in the mirror looking extremely uncomfortable, distressed about their own body types," McCaughey said. "Here's why that's distressing: Because I've sat at the bedside of a child nearing death from anorexia and there are families all over this country who have gone through this for years. Let me just finish and to see Mrs. Clinton take this terrible epidemic that's afflicting our daughters across the country and turn it into a political ad and then blame this very complex mental health problem on Donald Trump is the lowest I've ever seen a politician go."

In the past, Trump has attacked Rosie O'Donnell calling her fat. He also had problems with Miss Universe Alicia Machado calling her "Miss Piggy." In 1999, Trump criticized President Bill Clinton for having an affair with someone who wasn't beautiful. "People would have been more forgiving if he’d had an affair with a really beautiful woman of sophistication," Trump explained. An attorney taking a deposition from Trump said that the presidential candidate described a woman as "disgusting" when she attempted to take a prearranged and break to pump breast milk after giving birth. She explained that the milk was "my baby's food." These are just a few examples of Trump mocking a woman for her appearance.

CNN host Poppy Harlow was understandably confused. "my question is do you condone the comments Donald Trump has made about women's weight and their appearance more than once? More than twice, more than three times. Trump may have said privately 20 years ago—" Harlow was then interrupted by McCaughey, trying to ramrod over her statements. Harlow ultimately had to stop and say, "Betsy, let me finish, please."

Harlow continued, specifically asking McCaughey to use her passion to help girls with eating disorders to address Machado's statements that Trump himself drove her to an eating disorder. "She said that that led her to having anorexia and bulimia. So, since you brought those two horrific diseases up, my question is do you think Donald Trump has played any role in that offense as well?"

With a straight face, McCaughey answered, "no." Further saying, "I think it's amazing that Mrs. Clinton -- look, she had to go back 20 years to find something that he is alleged to have said."

Mr. Trump, this week, has urged his campaign to attack Hillary Clinton for infidelity her husband was involved in nearly 20 years ago.

Harlow also mentioned that it wasn't simply a thing Trump said 20 years ago, he repeated the same attack on Machado this week when justifying his comments to Fox News viewers. The conversation devolves from there.