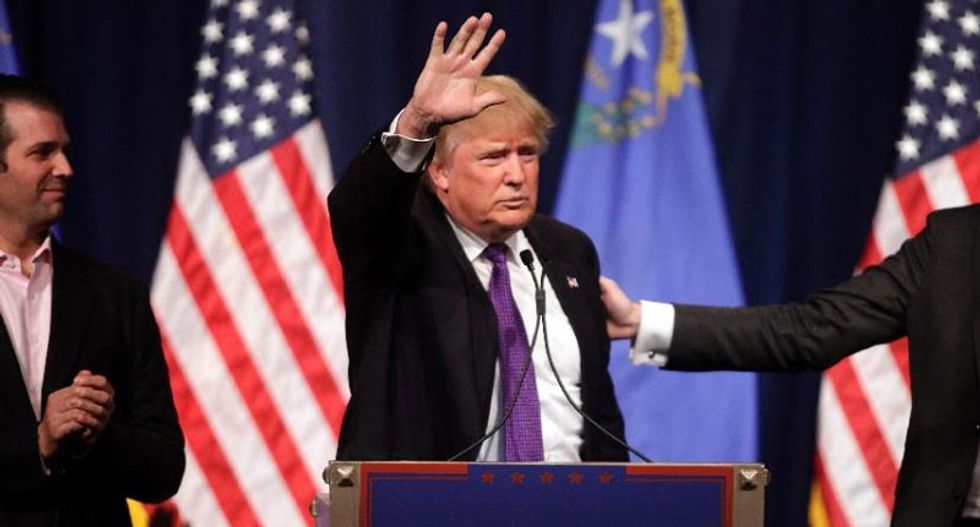 It is a cliché by now that Donald Trump has run a reality show campaign — a series of gaffes, surprises, outrages, weirdnesses, explosions, revelations, and just every other ingredient that comprise the popular TV genre of faux authenticity. On reality TV, the subjects are seldom artists or entertainers or high achievers in any field. They are personalities. Their roles are their lives, which creates a Möbius strip. What do the Kardashians actually do besides being on their show, which has, of course, generated all sorts of commercial opportunities that almost make it seem as if they are doing something? What is their talent, other than the talent for self-promotion?

All of this was anticipated 54 years ago by historian Daniel Boorstin in The Image, in which he defined a celebrity as someone who is known for being well-known. In a previous post, I discussed how this applied to Trump, who seems a hollow man except for his fame.

But I am not sure that Boorstin’s tautology, clever as it is, is really accurate. I would submit that celebrity isn’t a status, nor is it a media anointment. I think celebrity is actually a narrative form played out in the medium of life and then broadcast by the traditional and now social media. One earns celebrity — to the extent that you can call it earned — by keeping one’s narrative going. You lose your celebrity not when you lose fame or attention, your well-known-ness, but when you lose your narrative, which is what got you the attention in the first place.

Donald Trump is the first celebrity candidate in both Boorstin’s sense and mine — Boorstin’s because Trump is less a builder of edifices than a slapper-of-his-name-on-other-people’s edifices. He is literally known for being well-known. And in mine because Trump has spent the better part of his life providing narratives to the press to feed its insatiable appetite for gossip and his desire for attention. There are many ways in which Trump is a unique presidential aspirant, but chief among them may be this: He is the first candidate who ran for president to feed his celebrity. The entire campaign is a plot point – a means to a larger end, which is not the presidency, but keeping his celebrity afloat. Relevance is an issue for all of us, but especially for a 70-year-old man who is accustomed to the spotlight.

I thought of this when The New York Times ran two pieces this week. One was the first of a series based on interviews with Trump conducted by biographer Michael D’Antonio and given to The Times by him. What the interviews reveal is that Trump’s primary obsession is a fear of losing his fame. In the interviews Trump reviles Arsenio Hall, a former talk show host and one-time Celebrity Apprentice contestant. “Dead as a doornail. Dead as dog meat,” Trump eulogized.

The other article that struck me was one about how Trump used appearances on TV shows and in films to fuel his celebrity. Here was yet another conflation of Trump, politics and entertainment.

Everyone knows that Trump hates losing, so his put down of Hall won’t raise too many eyebrows. But when you read the interviews, you realize that Trump’s desperate fear of losing isn’t of the athletic variety, with which we are also so familiar. It isn’t the contest he is terrified of losing — or an election. It is his celebrity. That is why he despises Hall. Hall went from a somebody to a nobody. He lost his narrative. He didn’t provide anything for the press to write about or readers and viewers to care about. There was no drama. What Trump understood is that celebrity has to be stoked; it isn’t self-sustaining. It is like spinning plates on the end of sticks in a Las Vegas novelty act. As soon as one plate begins to wobble, you have to twirl it again.

As for the Hollywood connection, it was not just a way to keep his face before the public. Cameos are cheap and evanescent. Like those losers on “The Apprentice,” all of them folks who couldn’t keep their celebrity going (you don’t need to be Freud to figure out why Trump would confect a show out of that), cameos certify the loss of celebrity; they don’t advance it. Rather, what Trump saw is a way to integrate himself into Hollywood narratives — a way to use his fame to create his celebrity.

As the Times piece about Trump’s Hollywood connections tells it, he began talking about running for president as early as 1988. Why? Trump didn’t have any overriding sense of national mission. He doesn’t have one even now. Clearly, his ongoing, three-decades-long flirtation with the presidency was just a plot twist — a way of juicing the narrative when it was flagging. In that sense, it was no different than his affair with Marla Maples, his feud with Rosie O’Donnell, his nonstop lawsuits and everything else. The presidency was a publicity stunt. It still is. Viewed that way, nearly everything Trump does, most of which seems fatal to his candidacy, actually makes sense – just not political sense. He is running to continue being a celebrity. Bad politics, good TV.

The problem is that Americans are now so habituated to celebrity, so excited by it, that in the Trump campaign it has managed to overtake politics for many of them. Or put another way, the dull routines of politics pale before the unpredictable narratives of celebrity. More, celebrity neutralizes those routines. Take Trump’s now-famous pronouncement in the last debate that he might not accept the election results should he lose. You might note how he phrased that to moderator Chris Wallace: “I’ll look at it at the time. . . . I’ll keep you in suspense.” Suspense is a narrative staple. What critics saw as subversion of democracy, Trump and many of his supporters saw as another plot twist. More celebrity. And it did exactly what he intended, which was to create a Trumpian cliffhanger.

Politics, as I have written many times, has long been integrated with entertainment. The devices of the latter serve the ends of the former, and this has especially served conservatives: The X-Files fed conservative paranoia, 24 fed conservative xenophobia, every superhero movie feeds conservative American exceptionalism. But Trump has subordinated politics to his own narrative. He is the entertainment. We often hear that this election is about the future of America. Donald Trump has always seen it differently. For him, it is about the future of his celebrity and his fear of becoming another Arsenio Hall.