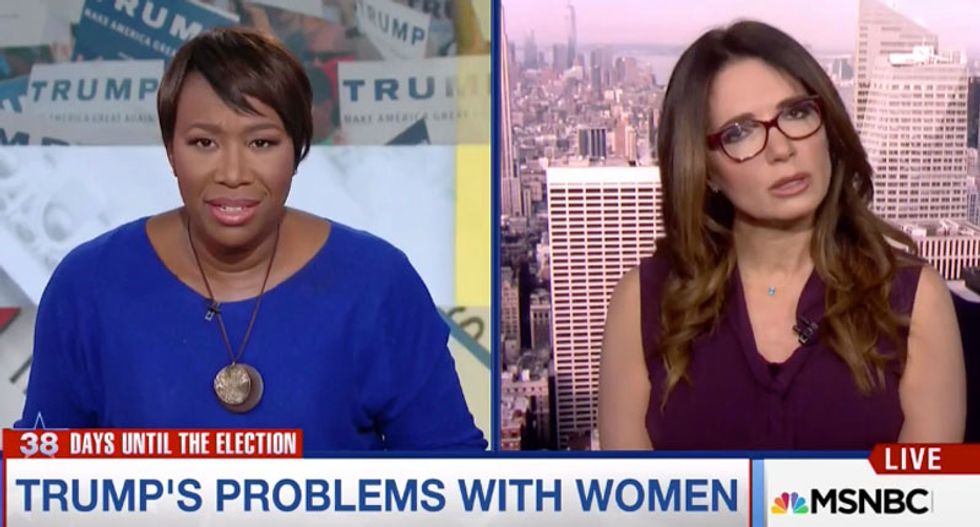 An advocate for GOP presidential nominee Donald Trump spent her time on MSNBC Saturday morning attempting to spin the avalanche of misogyny that pours out of Donald Trump's mouth with Hillary Clinton more polished comments, calling them "apples to apples"

Along the way, she said Trump calling a reporter the "c-word" was no different than Clinton's "basket of deplorables" comment.

Appearing on AM Joy, Latinas for Trump founder Ileana Garcia seemed ill -prepared to discuss Trump's ongoing problems with both women and the Latino community and attempted to dismiss the ongoing controversy overt the fat- and slut-shaming of former Miss Universe Alicia Machado.

Explaining that she is more interested in economic issues,  Garcia said, "I try to cut through the fat and go straight to it, he's obviously a very transparent person. He has vulnerable moments, he's not the most politically correct person.  It's not that I'm justifying him, I'm explaining to you how I feel as I watch it."

Host Reid brought her back to Trump talking about women, asking her if she was a parent and if she "felt comfortable" with Trump comments about women.

"You talk about conservative values, and I don't really think it is apples to apples," Reid said. "I don't think Hillary Clinton has ever said things like this about women, I mean we have him having calling a journalist the c-word.  You said you have a 19-year-old son. If your son did that, would you approve?"

"No, not at all, not at all, he's had another type of upbringing" Garcia replied before defecting the issue. "But lets not forget, Joy, also some of the things that happened, the confrontations that Hillary has had."

"Has she made a comment of that kind?" Reid pressed her.

"Well, um, not lately," Garcia shrugged. "She referred to me as a deplorable but I didn't take it personally because I'm not deplorable. The fact that I'm going to vote for Mr. Trump doesn't make me deplorable."