Before debate, Trump defies calls to quit over vulgar video 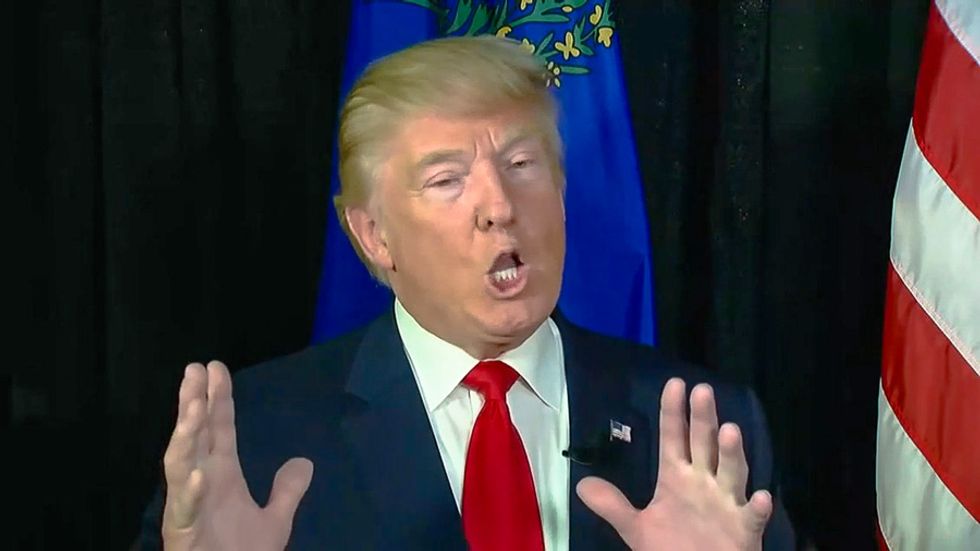 Republican Donald Trump on Sunday struck a defiant tone in the face of calls for him to abandon the U.S. presidential race, attacking prominent Republicans and saying he had "tremendous support" despite a storm over his vulgar comments about women.

On a day in which Trump was due to debate Democratic presidential nominee Hillary Clinton a month ahead of the Nov. 8 election, Trump took to social media to try to squelch any speculation that he could leave the race.

"Tremendous support (except for some Republican leadership"). Thank you," Trump wrote on Twitter.

"So many self-righteous hypocrites. Watch their poll numbers - and elections - go down!" Trump tweeted, apparently referring to Republican lawmakers seeking re-election who have withdrawn their support for him over a 2005 video that emerged on Friday.

Trump, then a reality TV star, is heard on the video talking on an open microphone about groping women and trying to seduce a married woman. The video was taped only months after Trump married his third wife, Melania.

The controversy has pitched Trump, 70, into the biggest crisis of his 16-month-old campaign and deepened fissures between him and establishment Republicans.

The pressure on him will be intense at the 9 p.m. EDT (0100 GMT Monday) debate at Washington University in St. Louis. CNN reported the first questions would be about the video.

Clinton communications director Jennifer Palmieri told reporters on Clinton's campaign plane: “We understand that this is uncharted territory ... to face an opponent that is in the grips of a downward spiral in terms of his own party belatedly walking away from him.”

A source close to the campaign of Trump's vice presidential running mate, Mike Pence, dismissed talk among some political analysts the Indiana governor might bolt the ticket in the uproar over Trump's comments.

"Absolutely not," the source told Reuters.

At a Democratic campaign event in Chicago, President Barack Obama weighed in on the controversy, saying Trump had been degrading not only to women, but to minorities, immigrants, people of other faiths, and the disabled.

Obama said that "tells you he is insecure."

"He pumps himself up by putting other people down," Obama said.

With Republican Party leaders in crisis mode and doubts emerging over Trump's ability to draw support from crucial undecided voters, there were nonetheless some early signs many of his core supporters would remain loyal.

A public opinion poll by POLITICO/Morning Consult, taken just after news broke of the video, found 39 percent of voters thought Trump should withdraw, and 45 percent said he should stay. Of those who said Trump should leave, only 12 percent identified themselves as Republicans.

As of Sunday afternoon, at least 160 of the United States' 332 sitting Republican governors, senators and House of Representatives members had condemned Trump's remarks, according to a Reuters review of official statements and local news coverage.

At least 30 had called for him to withdraw from the race and three other officeholders said he should consider doing so. Eight of those said they were withdrawing their endorsement as well.

Those facing a difficult re-election were more likely to speak out. All but six of the 40 Republican officeholders whose races are considered competitive had condemned Trump’s comments on the video, although only three members of that group called for him to drop out.

The threat to Trump's campaign was good news for investors in Mexico's peso, which surged more than 1.8 percent to 18.955 per dollar before the debate after markets in Asia began Monday trading. If elected, Trump has vowed to slap tariffs on Mexican imports, renegotiate trade deals and build a border wall to keep out illegal immigrants.

Any attempt to replace Trump on the ballot would face huge legal and logistical hurdles.

The Trump campaign was battling back, circulating "talking points" to a core of high-profile Republicans who promote Trump in the news media. The points sought to undermine establishment Republicans who have abandoned Trump.

“They are more concerned with their political future than they are about the future of the country,” said a copy of the talking points, described to Reuters by two sources close to the campaign.

A real estate developer making his first run at public office, Trump has made his battle against the establishment a central campaign theme.

"Phones have been blowing up for the past 24 hours," said a prominent Republican political operative in Washington, referring to a heavy volume of calls among party officials and Republican members of Congress.

The operative, who did not want to be identified, said Trump's troubles could steer campaign donations away from him and to Republican candidates for Congress and other down-ballot offices.

The source said Trump could help himself most during the presidential debate - the second of three before the election - if he addressed the video and an Oct. 1 New York Times report that he took so substantial a tax deduction on a declared $916 million loss in 1995 that he could legally have avoided paying any federal income taxes for up to 18 years.

Former New York Mayor Rudy Giuliani, a Trump adviser, told Sunday talk shows that Trump at the debate might choose to go on the offensive against Clinton by bringing up marital infidelities of her husband, former President Bill Clinton.

Republicans have attacked Clinton, 68, over what they say is her role in trying to discredit women who accused her husband of sexual misconduct decades ago.

Despite having recovered from a string of setbacks, Trump had an uphill battle to win the White House. Before the video surfaced, a Reuters/Ipsos poll had Clinton leading by 5 points on Friday. The question now is whether Trump's quest for the presidency has been dealt a lethal blow.