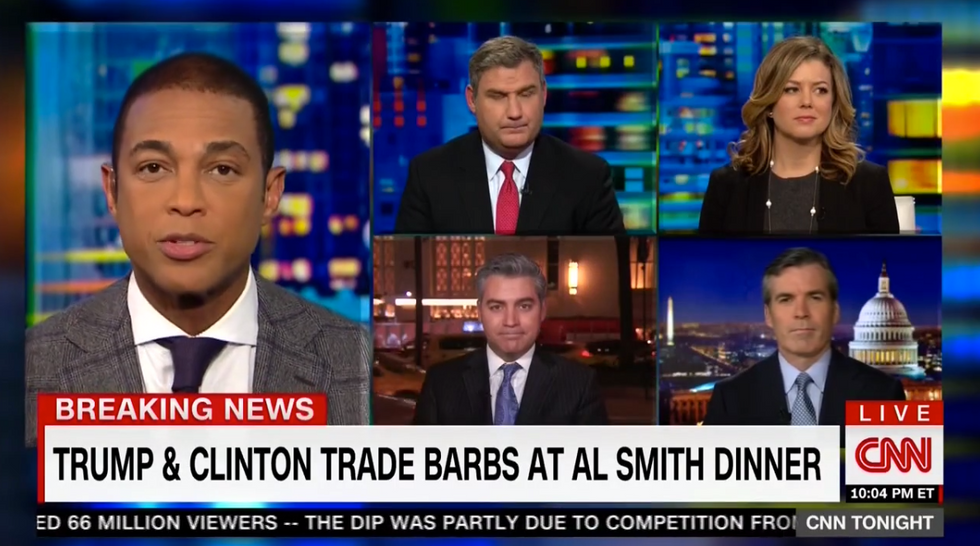 Republican nominee Donald Trump and Democratic nominee Hillary Clinton shared a stage once more on Thursday night after Wednesday's final Presidential debate of the 2016 cycle. This time, the two met at the Al Smith Dinner, an annual fundraiser for Catholic charities.

However, it was unclear whether the candidates got the memo of the night's purpose. CNN anchor Don Lemon introduced the segment as, "Donald Trump and Hillary Clinton attending Al Smith Dinner. On the menu, a big serving of awkward!"

Panelist Jim Acosta noted that, while both candidates made some funny jokes at one another's expense, he thought, "it was hard for people in that room to laugh because this has been such an awful campaign."

Acosta added, "And you know, we were standing outside this event but I feel like I'm getting frost bite from the ice in the room inside the event."

Some of Trump's jokes about Clinton fell flat throughout his roast, which resulted in a lot of boos from the crowd. Acosta said, "There wasn't even any laughter at that point. It was sort of this uncomfortable silence broken by boos and groaning."

He added, "They went for the jugular. Both candidates did, and frankly it's kind of shameful," commenting on how it was an example of how vicious this election has been.