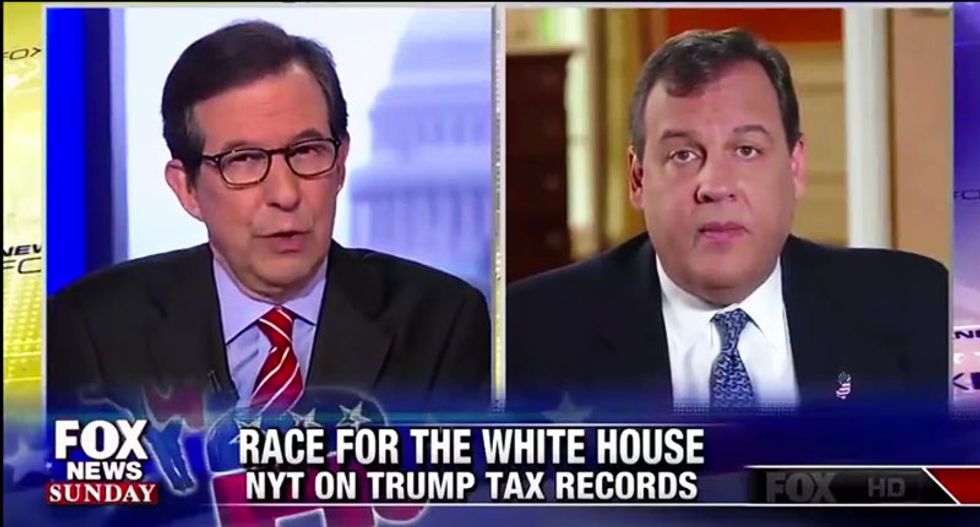 Following the Saturday night revelation that GOP presidential nominee Donald Trump lost over $900 million in 1995,  New Jersey Gov. Chris Christie attempted to spin the story as a good thing for the candidate during a Sunday morning Fox News appearance.

Appearing with host Chris Wallace, the Trump advocate called speculation that the massive financial hit, that possibly allowed Trump to avoid paying federal income taxes for 18 years, a sign of the businessman's "genius."

“What it shows is what an absolute mess the federal tax code is and Donald Trump is the best person to fix it," Christie asserted. "There is no one who has shown more genius in their ability to maneuver around the tax code as he rightfully used the laws to do that."

After Christie added, "This is actually a very good story for Donald Trump," the Fox host jumped on the comment.

"Wait, wait, wait," an incredulous Wallace pushed back. "You're saying it's a good story that he took a billion dollar loss and that he failed to pay any income taxes for years? That's a good story?"

"Chris, first of all you don't know that he didn't pay any income taxes," Christie shot back. "All the story said is that kind of loss can be used for up to 18 years. But if Mr. Trump made $600 million the next year, $600 million of that loss would be wiped out. So let's be precise about what it said."

"In effect what he said in the first debate is that if he paid no taxes, that made him smart," Wallace stated. "I assume that if he had paid taxes over all those years he would have told us so."

"Well, that's a big assumption on your part based upon the advice he has gotten," the increasingly belligerent Christie responded. "This proves that the advice he's gotten from his lawyers and accountants is the right advice."