Clinton slams Trump on ISIS: 'He’s basically declaring defeat before the battle has even started' 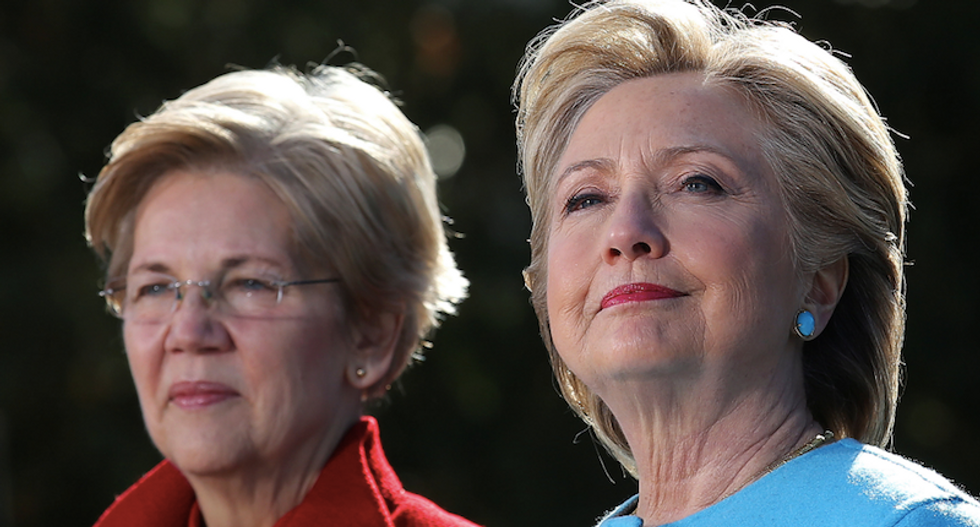 U.S. Democratic presidential candidate Hillary Clinton slammed rival Donald Trump on Monday for saying that the week-old effort to retake the Iraqi city of Mosul from the control of Islamic State was going badly.

“He’s basically declaring defeat before the battle has even started,” Clinton said at a campaign event in New Hampshire. “He’s proving to the world what it means to have an unqualified commander in chief.”

In a tweet on Sunday, Trump, the Republican nominee for the Nov. 8 election, said the “attack on Mosul is turning out to be a total disaster. We gave them months of notice. U.S. is looking so dumb.”

Iraqi and Kurdish forces, backed by the United States, have mounted a huge assault on the area surrounding the city, the last stronghold of Islamic State forces in Iraq. They have retaken about 80 Islamic State-held villages and towns since the offensive was launched on Oct. 16, but have yet to move on the city itself.

Trump reiterated his position during a rally on Monday in St. Augustine, Florida, where he also urged supporters to vote early and declared his campaign was winning the election.

"So now we’re bogged down in Mosul. The enemy is much tougher than they thought. They’ve had a lot of time to get ready," Trump said. "It’s a horrible, horrible situation that’s going on. Why did we have to tell them we’re going in?"

The operation could last weeks, or even months. Islamic State mounted counterattacks on Monday across the country against the Iraqi army and Kurdish forces, trying to deflect attention away from the Mosul campaign.

Trump suggested last week during the final 2016 presidential debate that the U.S.-backed attack on Mosul was orchestrated to help Clinton in her White House bid.

With just over two weeks to go until the election, Clinton, President Barack Obama's first-term secretary of state, leads the New York businessman in national opinion polls. Both candidates have been focusing on a small set of political swing states that could decide the contest.

Seeking to cement a wide advantage she holds with women voters, Clinton enlisted the help of firebrand U.S. Senator Elizabeth Warren of Massachusetts, who blasted Trump over allegations he tried to grope or kiss several women without their consent over a 20-year span.

“He thinks that because he has a mouthful of Tic Tacs that he can force himself on any woman within groping distance,” Warren told a raucous crowd of 4,000 at St. Anselm College in Manchester. “Well, I’ve got news for you, Donald Trump. Women have had it with guys like you.”

At least 10 women have said Trump made unwanted sexual advances, including groping or kissing, in incidents from the early 1980s to 2007, according to reports in various news outlets. Trump has denied the women's allegations, calling them "totally and absolutely false" and promising on Saturday he would sue his accusers.

Warren's mention of Tic Tac mint candies referred to a moment in a 2005 video that surfaced earlier this month in which Trump was heard boasting about groping and kissing women.

Clinton praised Warren for taking the fight to Trump. “She gets under his (Trump’s) thin skin like nobody else,” the candidate said.

Warren is one of a handful of high-profile surrogate campaigners helping Clinton in the final weeks of the race. In California, Obama raised money for his former top diplomat and joked on the "Jimmy Kimmel Live" show that he laughed most of the time when he saw Trump on television.

Trump spent the day campaigning in Florida, a critical swing state. At an event in Tampa, he criticized Clinton's position on Syria. "If you look at her plans for Syria, these are the plans of a child. These are the plans of someone who doesn’t know what they’re doing," he said.

At an earlier event for farmers in Boynton Beach, Trump disputed multiple national and state polls that show him lagging Clinton and accused the media of distorting poll results to discourage his supporters from voting.

Just the day before, Trump’s campaign manager, Kellyanne Conway, acknowledged that the candidate was trailing in the race, saying in a TV interview: “We are behind.”

The former first lady is working to turn out her supporters in states such as Ohio, where singer Jay Z plans to hold a concert in support of her candidacy, the Clinton campaign said.

According to the Reuters/Ipsos States of the Nation project, which surveys the vote in battleground states, Clinton leads Trump in most of the states that Trump would need to win to have a chance of amassing the 270 Electoral College votes needed to capture the White House.

According to the survey, she had a better than 95 percent chance of winning, had the election been held last week. The mostly likely outcome would be 326 votes for Clinton to 212 for Trump. The Electoral College votes represent a tally of wins from the states.