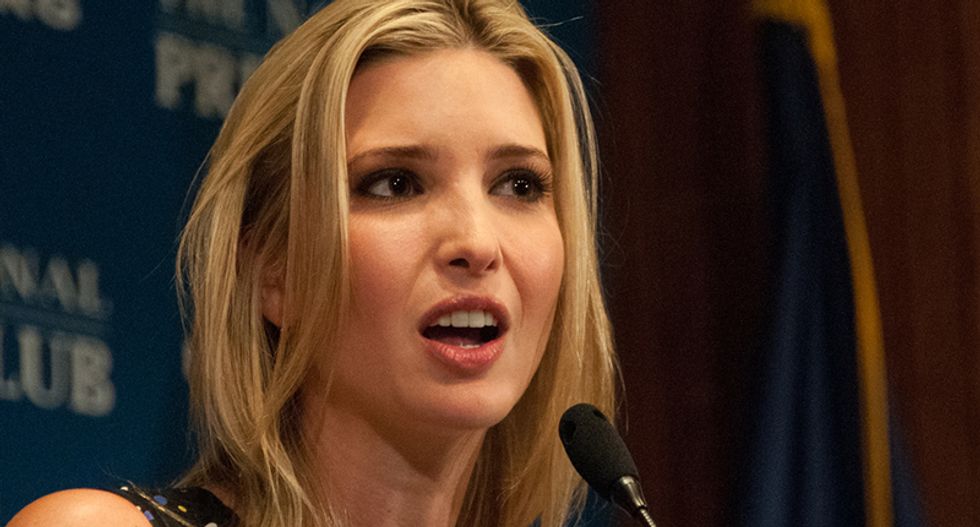 Ivanka Trump has ignored reporters' attempts to ask questions about the avalanche of sexual assault allegations piling up around her father.

The 34-year-old Trump told CBS News in May that he father was "not a groper," but at least 12 women have so far come forward to claim the Republican presidential nominee had forced himself on them.

She's been campaigning this week for her father, but she has ignored requests to comment on the mounting claims in the wake of a 2005 hot mic recording that captured Trump boasting that he could get away with forcibly grabbing women by the genitals because he is rich and famous.

She campaigned Thursday in Philadelphia, where she took some personal questions and praised her father as "a great dad."

"What I can uniquely talk to all of you about is my father as a personal mentor and a role model to me as a great dad growing up," she said.

Ivanka Trump described the 2016 election as "bizarre and vicious" during a campaign stop in Pennsylvania, and she told supporters that "this is a bloodsport."

But she repeatedly ignored questions from CNN's Dana Bash and other reporters seeking her reaction to those recordings.

News organizations are starting to take note, and have called on her to comment on the scandals.

Trump supporters at those events Thursday mostly shrugged off sex abuse allegations against the Republican presidential nominee, although some said they only reluctantly still support him.

"He was at that time a reality TV star," said voter Melissa Braithwaite, who strongly backs Trump. "I think he wasn't saying what he does to women per se -- I think he was just bragging."

Another Pennsylvania Republican, who attended an Ivanka Trump event with her 12-year-old daughter, said she had decided to ignore her concerns about the candidate's statements.

"It's been a hard road," said Trump supporter Jessica Curtis. "If he said all those things right now -- in a different context it might be different, but I had to separate it and I think he would do a better job representing a lot of what America needs."

Other conservative voters had tuned out reports about Trump's recorded statements and alleged misdeeds because they mistrusted the media.

"I am very annoyed with the news media," said voter Ann McGinty. "They are extremely partisan this time."