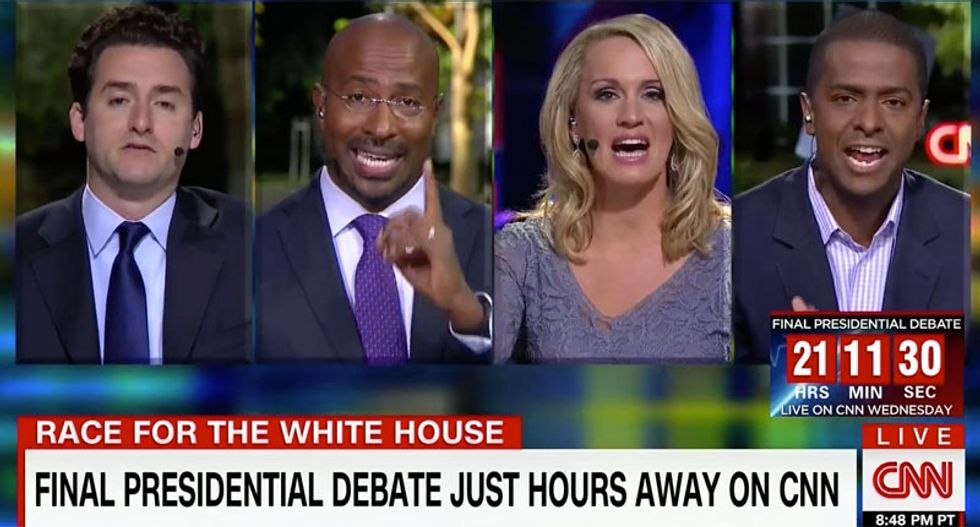 As has become her custom since being put on the CNN payroll, Trump advocate Scottie Nell Hughes was once again put in the position of defending the indefensible words and actions of GOP presidential nominee Donald Trump -- only to gamely try and ultimately fail again.

Appearing with host Dona Lemon, Trump booster Andy Dean, and commentators Van Jones and Bakari Sellers, Hughes repeatedly denied that Trump ever stormed into beauty pageant dressing rooms to gawk at the naked or near-naked contestants -- even though he has admitted to doing so in interviews.

To get to that point, Sellers gave Hughes a brief history of Trump's boasts about objectifying and demeaning women.

"What's accurate is that Donald Trump said that he likes to commit sexual assault because he can do that," Sellers began. "He said 'I just walk up and I grab them because I can do that. I'll put a Tic Tac in my mouth, because I'm famous, and I kiss them.' And then you have women who come out and say.' He put a Tic Tac in his mouth and he kissed me, or he grabbed me, or he groped me.' And all of the sudden were supposed to say, 'Oh, they're lying.'"

"More importantly, this is the same person who talked about women's appearances, women's flat-chests, the whole plethora, who walked into locker rooms where women were changing for pageants. "

Unable to contain herself, Hughes blurted, "Okay, hold on, that has not been proven."

Hilariously - and in chorus --both Sellers and Van Jones shouted," He said it himself!"

"But that doesn't mean he did it," she insisted.

"Scottie," Lemon interjected. "He did say it himself, again on Howard Stern, he said that he walks into the room and, 'I have to inspect the place.' But go on, Scottie."

Speaking as "a female," Hughes maintained that harping on the subject was not hurting Trump with other women, adding many of the accusations against Trump have been "discredited."

"By the way, this underage that you keep accusing, there were chaperones that never came forward and said wrong things happened," she rambled on. The details do matter, You can't just throw mud, this is what Democrats do."

Given a chance to respond, Seller's stated, "I need to be clear. I have an 11-year-old daughter. And I don't care if a chaperone is in the room,, If a grown adult man, running the pageant or not, walks in while she's changing clothes - that's a problem."

"Then why did he brag about it," Jones asked her.

"It never happened," she said.

Prince William and his wife Kate head to the United States this week for their first visit in eight years, and the popular couple's inaugural trip as prince and princess of Wales.

The three-day visit to the northeastern city of Boston culminates on Friday evening with a star-studded ceremony for William's Earthshot Prize initiative to tackle climate change.

Axios reports that McCarthy faces a daunting mathematical challenge to becoming Speaker, as there are already three Republicans who are hard "no" votes against him, meaning he essentially has to have the support of every other Republican in his caucus to prevail.