CNN panel knocks down Trump claims of election fraud: 'This isn't a thing' 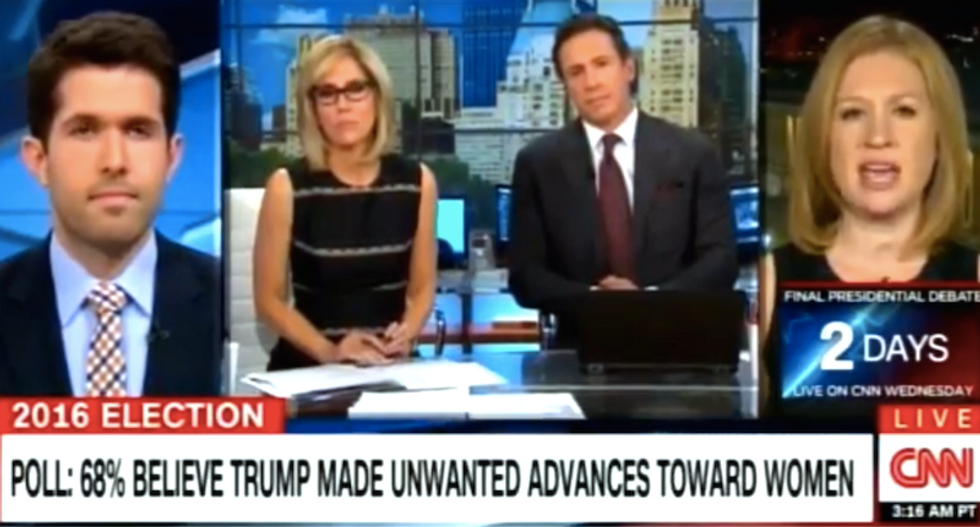 Donald Trump and his running mate, Mike Pence, are questioning the integrity of the American democratic process without any real evidence -- even as early votes are already being cast.

Jackie Kucinich, a CNN political analyst and the Washington bureau chief for The Daily Beast, said Monday morning on "New Day" that multiple studies had found fewer than three dozen instances of in-person voter fraud out of billions of ballots cast.

"This isn't a thing, but that's not stopping Donald Trump and Mike Pence, frankly, from spreading this," Kucinich said. "(Sunday) on 'Meet the Press' Mike Pence was asked whether they would accept the election results. He said, yes, but almost on the next breath he went back to the fact that this election is being rigged."

The Republican candidates' rhetoric threatened the peaceful transfer of power, said "New Day" host Chris Cuomo, although they produced no evidence of fraud.

"They haven't really offered any evidence, and so people are filling in the blanks themselves," Kucinich said. "That's why you see people quoted in various states that there might be violence. They're going to make sure that people who don't look like them are vetted or that they're going to watch them. It's troubling rhetoric coming out of the Trump campaign, and coming from down on the ground going into election day -- and let's not forget people are actually voting right now. So, it's not that there might be some fracas at the polls, but this is already happening."

Trump's rhetoric appears to be working.

A new poll found 41 percent of voters believe the Nov. 8 election could be "stolen" from Trump, who has encouraged his supporters to monitor polling stations in largely minority voting districts.

"It's called racial profiling," said Steve Webb, a carpenter and Trump supporter from Fairfield, Ohio. "Mexicans, Syrians -- people who can't speak American. I'm going to go right up behind them. I'm going to do everything legally. I want to see if they are accountable. I'm not going to do anything illegal. I'm going to make them a little bit nervous."

CNN's Alisyn Camerota said an exhaustive study by News 21, a group of top journalism students from universities all over the U.S., found 2,068 alleged instances of voter fraud, including 10 cases of voter impersonation, out of 146 million total registered voters.

"They drilled down on Arizona, Ohio, Georgia, Texas, Kansas -- that's where attorney generals actually prosecuted cases," Camerota said. "So beyond allegations, they prosecuted 38 cases of voter fraud -- 38 out of millions. In Arizona there were 13 cases of people prosecuted for double voting -- 13 -- and this is over 10 years, by the way. This isn't one year, over 10 years. Then the Republican National Lawyers Association also looked at it themselves and they found 200 allegations of election fraud, again, over 10 years."

Those isolated instances simply weren't enough to affect the outcome of a national election, and at least some of those cases were unintentional, said Alex Burns, a political correspondent for the New York Times and a CNN political analyst.

"It's usually not the kind of voter fraud that people imagine when they think of what happens when somebody steals an election," Burns said. "It's not people in a county courthouse stuffing ballots in a box or even showing up and me saying, 'Hi, I'm Chris Cuomo. I'm here to vote.' It's people voting in a jurisdiction where they're no longer technically registered or they haven't updated their registration, or they're in a primary where they're not supposed to be voting in a primary."

"Each of those infractions is something authorities, of course, ought to look at, but there is simply no indication that there is any kind of systemic problem with voting in this country," Burns said. "I spoke to the Ohio secretary of state yesterday, who is a Republican, who says we're trying hard to run a fair election here, and this kind of talk just it takes time away from doing our actual and difficult jobs."