CNN panelist shoots down Pence debate 'win': He only won because he wasn't as 'crazy' as Trump 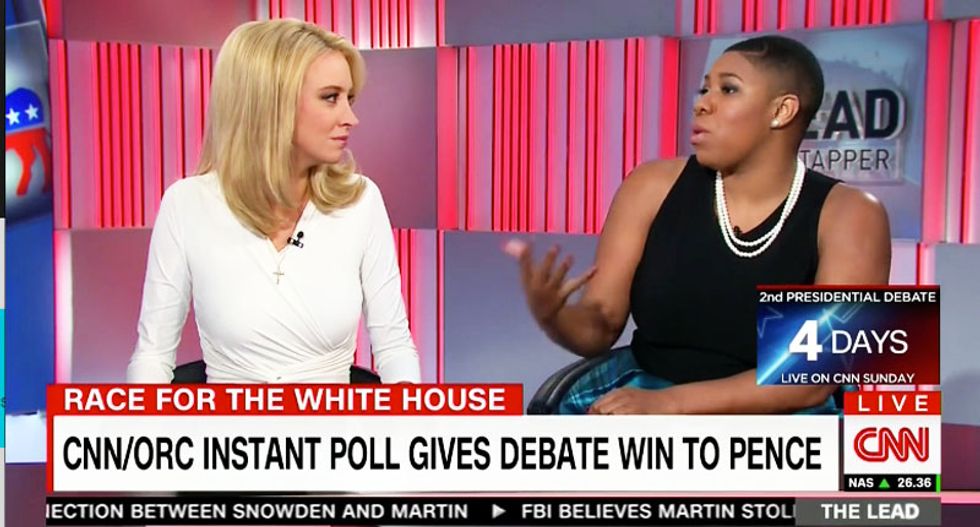 Continuing the postmortems on Tuesday night's vice presidential debate between Republican Mike Pence and Democrat Tim Kaine, a CNN contributor lambasted Pence's fact free answers and claimed that, if he did win, it was because he didn't appear to be as "crazy" as head of the GOP ticket.

After Donald Trump surrogate Kayleigh McEnany attempted to spin away the policy differences between Pence and Trump that were revealed during the debate, host Jake Tapper asked former Bernie Sanders press secretary Symone Sanders (no relation) if she thought Pence walked away with a win --and if it bothered her.

"It bothers me as a person who believes in facts, and not just a Clinton supporter," she began while facing McEnany. "I don't think you can win a debate without facts and telling the truth. Governor Pence didn't tell the truth."

"Did he come out looking relaxed and not as crazy as his running mate? Yes," she continued. "He seemed relaxed. Seemed like he was having fun. In terms of what are the facts, did he lay out policy and the truth to the American people? Absolutely not."

Addressing the topic of a frustrated Pence blurting, "You whipped out that Mexican thing again!" after Kaine baited him over Trump's well-documented racist comments, Sanders said Pence's outburst will hurt Trump with what little support he gets from the Latino community.

"To the point that Amanda [Carpenter]made about that he laughed some things off," Sanders cautioned. "I don't think the Latino community is laughing about the Mexican thing. So there are real things."