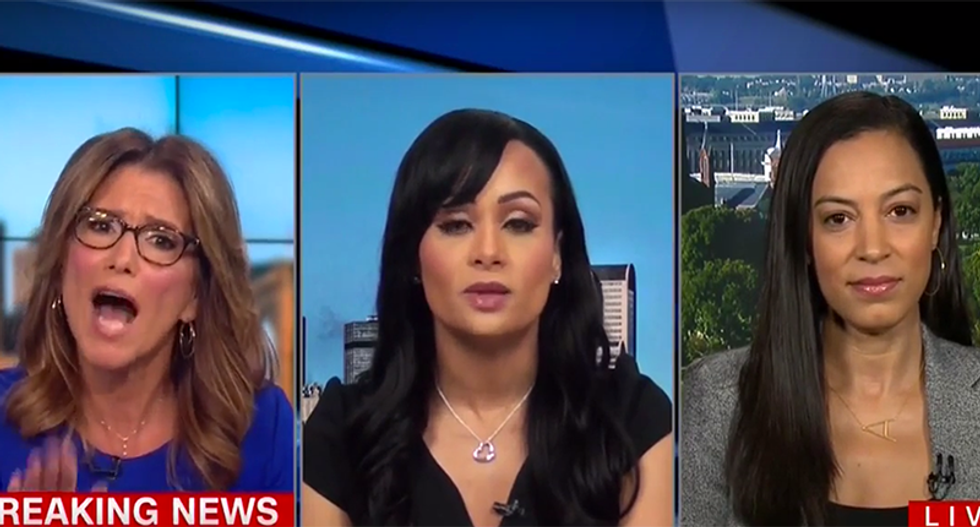 CNN host Carol Costello was forced to shut down another interview when Donald Trump's spokesperson wouldn't shut up.

Trump surrogates and spokespeople have had problems in interviews as the candidate and campaign becomes more desperate. Just a few weeks ago, Trump's economic advisor Steve Moore not only refused to let pundit Angela Rye speak, host Bill Maher had to physically pull his arm back and encourage Rye to say what she needed to say. Even then, Moore tried to talk over her.

The same thing happened to Rye again today with Trump spokesperson Katrina Pierson. While Pierson has been replaced by campaign manager Kelleyanne Conway, she still appears on occasion on Fox News. Today, however, on the rare CNN appearance, Katrina was so possessed by her own self-importance she once again couldn't stop talking, forcing Costello to simply end the interview.

While the interview began calmly discussing Speaker Paul Ryan's latest feud with Trump, Pierson managed to keep a grip on her horses.

"But these comments, Katrina, are driving women away," Costello said about Trump's statements caught on video. "The latest polls show that Mr. Trump is in free fall right now. His attacks aren't working. His apologies aren't working so, why doesn't he try something else?"

Pierson concluded, "Well, look, we have plenty of time left in this race."

Costello cut in, "You have 28 days. People have already started voting."

Rye began to talk about the ways in which Trump has perpetuated rape culture, but Pierson jumped in blaming Hollywood and rap music for their role. Costello agreed that Hollywood does have a role in sexism and sexist behavior, but it obviously isn't something Americans expect from a president.

"This is insane," Rye said.

"We're talking about a society that puts women on a pedestal because of a sex tape," Pierson claimed.

"This is something Mr. Trump said who he thought was in private," Pierson said, as if that somehow excuses it.

"As he was part of that hip-hop culture," Pierson tried to claim.

"The way that sexual assault is portrayed in some Hollywood movies is wrong, and it is, and I agree with you there," Costello said. "But that doesn't make what Mr. Trump said right, right? So, to me when you say these things I don't know if you really mean them. I don't know if you mean them or if you're deflecting to excuse Mr. Trump's comments, and there's a difference."

Pierson talked about Trump's apology for his words but Rye wanted to know about his actions. That sent Pierson off again. Costello tried to stop the back and forth but Pierson kept going, shouting over the host and ultimately Costello cut from Pierson to reporter Dana Bash. "That conversation was going nowhere," she quipped.

Check out the insanity below: