Colbert grills ‘Melania’ on ‘boy talk’: What will Trump do around 'heavy hitters like Mario Lopez’? 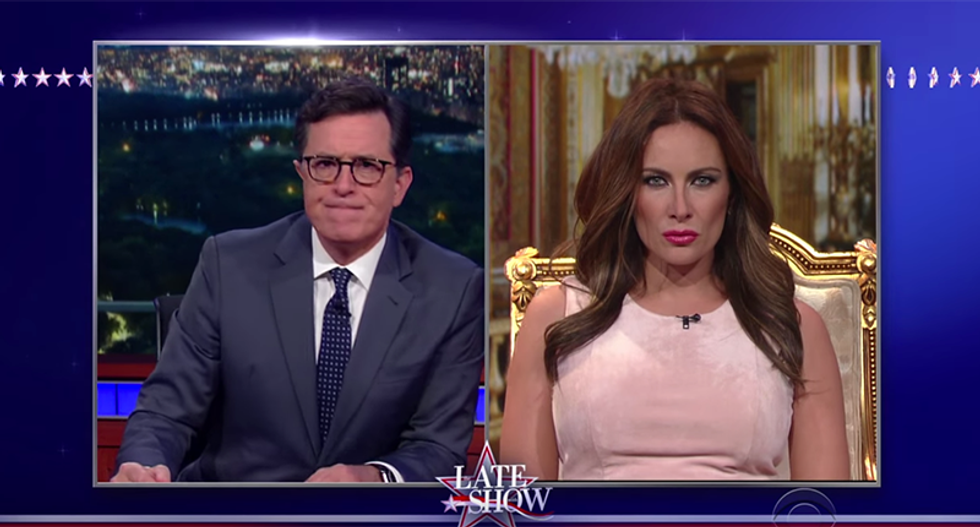 Stephen Colbert really wants Republican presidential nominee Donald Trump to accept responsibility for his actions. But so far, all the "Late Show" host has seen are excuses and the Trump family throwing others under the bus.

In her interview with Anderson Cooper Monday night, Melania Trump explained her husband's "boy talk" was "egged on" by Billy Bush in that "locker room bus." No one really buys that, including Colbert. "Now I know why they're on a bus. It's easier to throw Billy underneath it," Colbert joked.

"So, let me get this straight," he continued. "Melania's defense of Donald Trump, the man who wrote The Art of the Deal, is that he got out-maneuvered by a guy that has been deemed by the 'Today Show' to be unqualified to watch someone else make a festive fall frittata. If Billy Bush can manipulate Donald Trump, we've got to keep President Trump away from heavy hitters like Mario Lopez... Just imagine what kind of impact Billy will have once Trump has the nuclear launch codes."

Colbert welcomed back actress Laura Benanti as Melania for the first time since her powerful appearance after the Republican National Convention in July. Excited to be on, Melania made sure to tell Colbert that there was no one else in the room with her to coach her on what to say. She pursed her lips, sucked in her cheeks and gave a thumbs up.

Colbert wondered why the public hasn't seen much of her since the convention but she explained that it was her choice. "Yes, they did not send me to an undisclosed location. I am a private person, Stephen. My life is not a photo-op," she said posing strategically for the cameras and flipping her hair around.

Colbert wanted to know more about the impact of the campaign on her but she urged him to look at the issues. "Stephen, why are we talking about me when we have to focus on the important issues facing our nation like how the election is rigged." She blames the left-wing media, international bankers and Billy Bush for the rigging.

"Billy Bush?" Colbert wondered. "You don't blame your husband for what he said?"

"Yes, I do! I said to my husband that those words are very unappropriate, plus he said them on a bus. Disgusting." Mrs. Trump said. "This is not the man I married."

When asked if she had forgiven her husband she began to shake her head until seeing someone off camera that she pointed at. "Yes!" she said, suddenly nodding and then rolling her eyes. "Yes, yes, apparently, because he explained it was 'locker room talk.' I did not know this, but when American men gather to sport they always brag of grabbing women by the Billy Bush."

She went on to proclaim that all of the accusations are lies, "except the ones where there's videotape. Then, it's 'locker room talk.'" It makes perfect sense, Trump was walking into a "women's locker room" when he went into watch the underage Miss Teen USA girls changing clothes.

Mrs. Trump then began blinking wildly and Colbert asked if she was okay. "I am fine. I'm certainly not blinking out in Morse Code that someone else is in the room and telling me what to say."

Sure Trump, might be a 70-year-old man, but Mrs. Trump explained that boys and men are really all the same. "Bad boys, bad boys, what you going to do?" she quoted. "No matter how nice they seem, they're all foul-mouthed Billy Bush grabbing pigs. I'm talking about your husband, your brother, The Pope, Luke Skywalker, all of them... They're all animals. If only a woman could be president," she laughed.

When Colbert told her that Hillary Clinton is a woman, Mrs. Trump got a fake phone call and had to go.