Colbert mocks plagiarism scandal: 'If only someone in the Trump campaign enjoyed firing people' 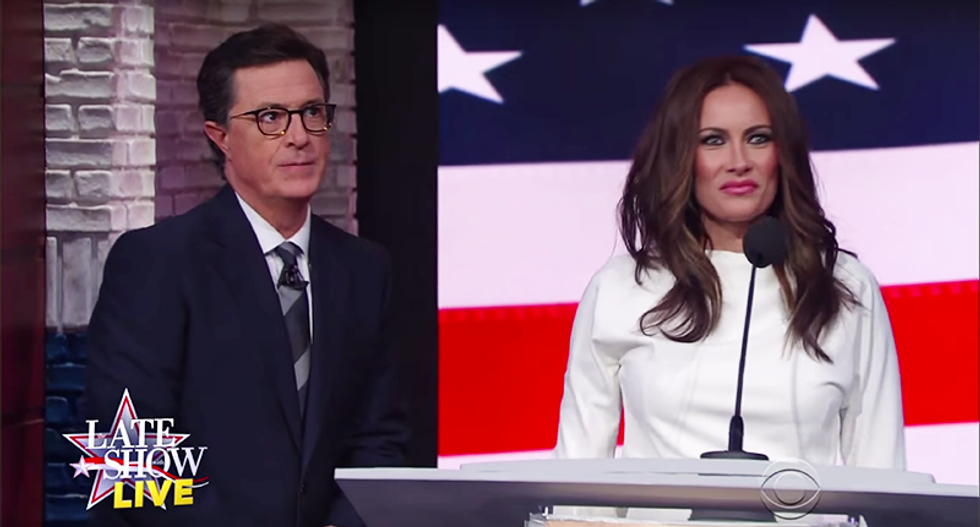 The nonstop controversy over Melania Trump's plagiarism of a 2008 speech from Michelle Obama has now reached the level of intense rumors, along with hilarious mockery thanks to Stephen Colbert, who brought the hashtag #MelaniaTrumpSpeechQuotes to life on Tuesday night.

Colbert is doing his show live all week during the GOP convention to give up-to-date commentary on what happens, but Mrs. Trump's plagiarism didn't gain full steam until Tuesday after Colbert's show. That's why he stoically addressed the nation from his desk with an important message at the top of the show.

"Personally, I don't think Mrs. Trump is to fault at all," Colbert began. "I think her speechwriters are to blame, and yet, no one has lost their jobs. If only there was someone in the Trump campaign who enjoyed firing people."

Colbert admitted that he had a personal friendship with the Trumps, despite his previous commentary, and that he wanted to give Melania Trump an opportunity to set the record straight on national television with a statement of her own. He then brought out a looka-like, clad in white, who swore that she wrote the speech herself.

Mrs. Trump explained there is no way she could have plagiarized because she learned "honesty" during her "humble upbringing. In west Philadelphia, born and raised, on a playground is where I spent most of my days," she echoed the profound words from the "Fresh Prince of Bel-Air" theme song. "So, to those who say I stole my speech, I say: Give me a break! Give me a break! Break me off a piece of that Kit-Kat bar! They may be able to take our lives, but they will never take our freedom! I am mad as hell and I am not going to take it anymore! You've got to fight for your right to party! Boom goes the dynamite. Hakuna matata. Ba-da-bop-ba-ba, I'm loving it," she repeated catchphrases from famous television commercials while posing in a perfect model stance.

"Oh, and one more thing. Live from New York it's—" she was then stopped by Colbert, presumably for copyright reasons, and announced the show.

Check out the full speech below: