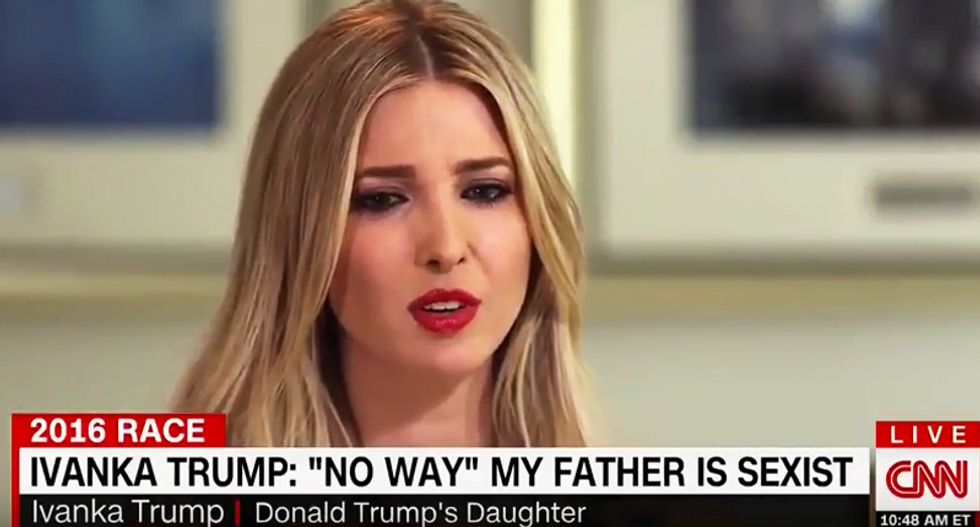 It seems Trump's business spiral isn't isolated to the Donald. And Ivanka Trump might soon need to take her name off of her fashion line now, as well. According to Yahoo Fashion, women are not only  boycotting Ivanka's brand, they're also avoiding the stores that sell it.

Mr. Trump's campaign has brought a heightened scrutiny on his business dealings as well as the businesses of his children. But, even as Ivanka has pushed paid family leave, her own employees have called out her hypocrisy -- saying that they had to fight Ivanka Trump to gain it for themselves. While Mr. Trump's campaign attacks the US government and politicians on both sides of the aisle for trade laws, both Trump and Ivanka take advantage of cheap labor in China. Ivanka's fashion line, like Trump's menswear, is manufactured by Chinese workers instead of workers in the United States -- where her father claims "we don't make anything anymore."

Now, some women are turning away from Ivanka, thanks to her father's attacks on women and women's rights. Yahoo talked to brand and digital strategy Shannon Coulter, who recently called on Americans to boycott Ivanka Trump's clothing and accessories. The company is estimated to be worth $100 million -- but not for long if these women have something to say about it.

Not enough to not buy Ivanka's collection. She campaigns for him. We should avoid stores that carry it. #fashionnotfascism #ivankant
— Shannon Coulter (@Shannon Coulter)1476242503.0

Thanks to Trump's sexual assault accusations, Coulter launched the hashtag #GrabYourWallet -- a take on Trump's "grab them by the p*ssy" remark as a call to action for women to “vote with their wallet.” While Ivanka recently claimed she's "just a daughter" not a surrogate,"  she's been at her father's side campaigning frequently. In a Cosmopolitan interview, Coulter explained that many women have given Ivanka a pass because it's difficult to be objective about one's parents. But when the "Access Hollywood" tape came out, all bets were off. “I think [women] took particular offense," Coulter said, "as I did, to the fact that Ivanka tries to make feminism a part of her brand but is standing by, as an official campaign surrogate, a guy who is an alleged serial sexual assaulter of women. The disconnect was too big. And they were ready to speak up about it and flex their consumer power about it.”

Everyone! #GrabYourWallet & tell the stores that sell Donald's products and those of his campaign surrogates: we wo… https://t.co/Om1ohcyCGd
— Shannon Coulter (@Shannon Coulter)1476982664.0

Cosmopolitan showcases Coulter's tweets, but the hashtag has “have earned an estimated 1 million impressions on Twitter, according to her analytics report.” The campaign has quickly gone beyond her 14,000 Twitter followers and Ivanka might need to take her name off of her line if her business is to survive.