Eric Trump argues he’s not 'in a bubble': 'You can't drive 500 yards without seeing a Trump sign' 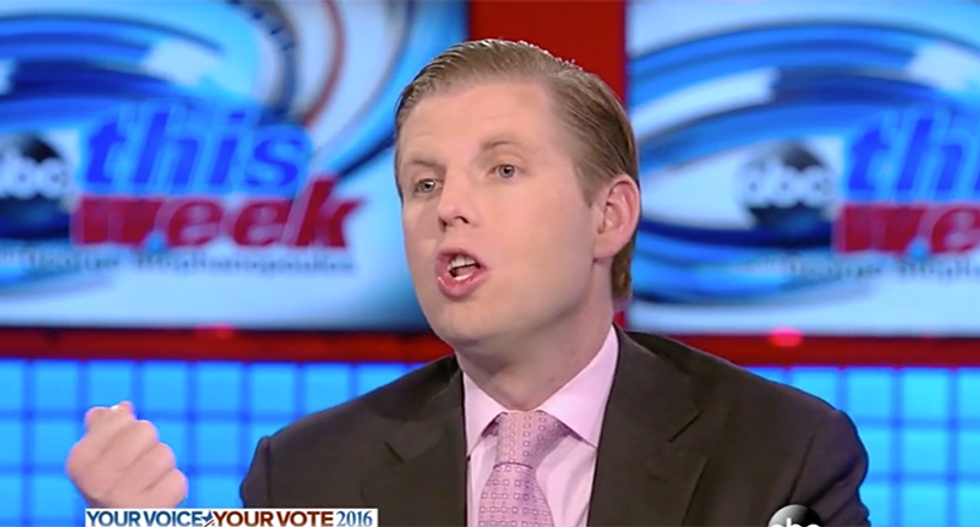 Everything is a conspiracy against the Trump campaign, according to GOP nominee Donald Trump's son, Eric. But, he's not worried about losing the election because he sees a yard sign every 500 yards as he's driving through states on the campaign trail.

In Sunday's episode of This Week with George Stephanopoulos, the host cited Trump's recent polling numbers in key battleground states to show how the candidate is losing. Eric doesn't believe them, though.

"I don't give much credence to the Washington Post polls," Trump said of the recent numbers that show Democratic rival Hillary Clinton leading. He cited Florida polls that showed the campaign leading by six percentage points during the primary elections -- and noted how Trump ultimately won Florida primary by nearly 20 points.

When asked if he felt like he was fighting from behind, Trump could only say "maybe" but it didn't much matter to him. "When I'm on the ground, the amount of love out there is incredible," he said. "The amount of Democrats I have coming up to me every day saying, 'I've been a Democrat my entire life. My entire family is made up of Democrats. We're coming out voting for you.'"

Stephanopoulos noted that all polls show Clinton winning among Democrats. "Do you think you might be living in a bubble of your own support?"

Trump said "no," citing Trump's Cleveland rally, which he said had 10,000 people in attendance.

"Hillary and Tim Kaine, they were in Pennsylvania. They had 600 people in a gym," Trump said. "I mean the enthusiasm levels are just totally, totally off the charts and, George, the amount of people I have come up to me saying, 'I haven't voted in 50 years, I'm embarrassed to say this to you, Mr. Trump, but I haven't voted in 50 years and I'm coming out and I'm voting for your father because I believe he'll change the country and I believe we don't need another career politician in the oval office' ...I hear that all day, every day. And those people aren't on the voter rolls, so I think we'll do very well and I really believe we're going to win this."

Eric Trump went on to say that the rally crowds weren't the only indication that Trump is winning -- that yard signs are, too. "To me, as his son, he wins no matter what," Trump said. "I'm so incredibly proud. He's carried the weight of this country for the last 18 months. I happen to think we're going to win. When I'm in the states and just came back from North Carolina and just came back from Ohio, I mean you can't drive 500 yards without seeing another Trump sign. You don't see a single Hillary sign. The enthusiasm differential between the two candidates is just -- it's not even -- it's not even close and I think you'll see that on Election Day."

Check out the fool-proof Trump logic below: