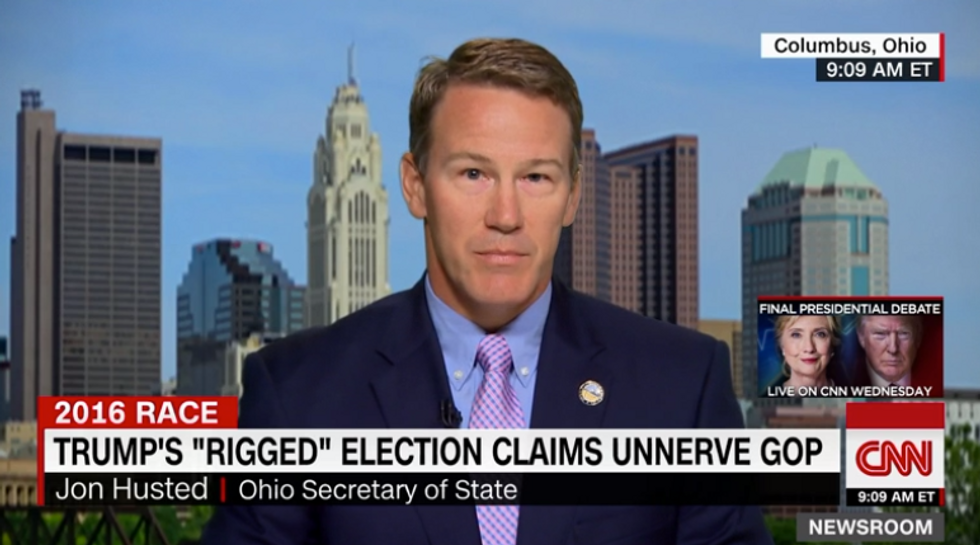 Republican nominee Donald Trump has been framing his failed campaign as one that was sunk by the media and a rigged election system. He has even called on his supporters to monitor polling places for alleged voter fraud on Election Day.

As Trump continues to make such irresponsible and baseless claims in an effort to refocus the cause of his sinking campaign, Ohio Secretary of State Jon Husted expressed his concern over Trump's narrative. He told the New York Times on Monday that Trump's allegations are "wrong and engaging in irresponsible rhetoric."

During a segment with CNN, Husted also said, "I can reassure Donald Trump that I am in charge of elections in Ohio and they’re not going to be rigged." He added, "We should not be questioning [the election process] or the legitimacy of it."

Of course there is large scale voter fraud happening on and before election day. Why do Republican leaders deny what is going on? So naive!
— Donald J. Trump (@Donald J. Trump) 1476707628.0

Husted has played an active role as a "voter fraud crusader" since he took office in 2011 as the Ohio Secretary of State.

In 2013, he launched an investigation into alleged voter fraud in Ohio, which found that most of the state's seemingly suspicious election activity was more likely due to confusion than fraud.

At the time, Ohio State Rep. Kathleen Clyde said in a statement, "I would like to see the Secretary of State focus on the real problems in our elections instead of playing to his base with these distractions." It appears that Trump's latest focus on voter fraud and rigged elections has shifted Husted's perspective.

In recent weeks, Trump has been ramping up his war on the media after the Washington Post released audio of the presidential candidate bragging about sexually assaulting women.

At least 17 women have come forward since the tape was released, and they have accused Trump of sexual harassment and assault.

The GOP nominee is now suggesting that these accusations are part of a media and Clinton campaign conspiracy against him in an effort to take down his campaign.

Husted told CNN he was "remorseful or regretful that [Trump is] saying things like this, which really undermine the potential he has as a candidate."

According to the latest RealClearPolitics polling average, Trump is down by 1.6 points in the battleground state of Ohio, with 42.4 percent voter support behind Clinton's 44 percent.