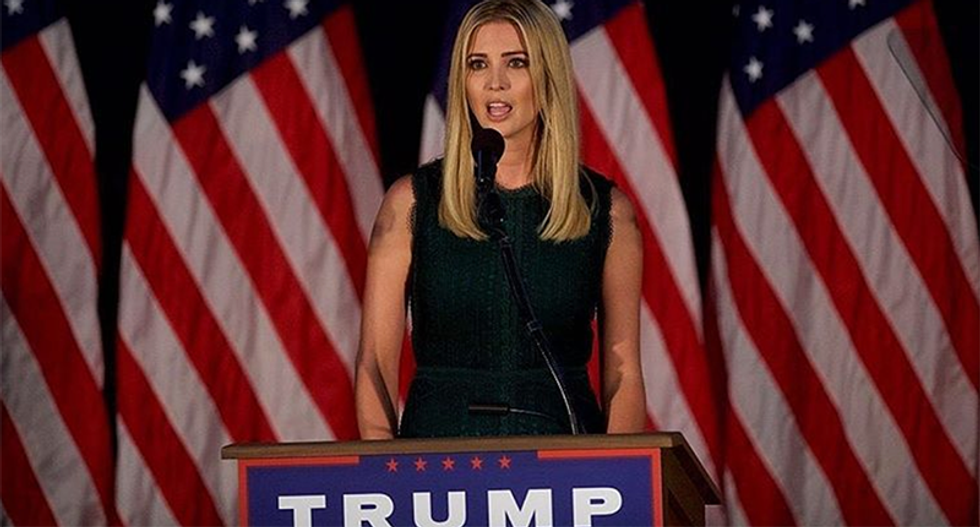 Donald Trump's name is so toxic that it has harmed his own businesses or hotels for whom he has leased his name. But now that Trump name is beginning to have a huge impact on the rest of the family.

Just last month, the social media app FourSquare revealed data showing the decrease in foot traffic at Trump-named properties. The numbers were even lower for women, who are avoiding Trump brands in larger numbers.

This weekend, Raw Story explained how one woman's boycott of Ivanka Trump's fashion line and accessories has promoted other woman to respond in kind.

But that boycott has been turned into actual numbers. According to a Fortune report, fewer than one in four women would buy anything from Ivanka Trump's brand. It's unclear whether the boycott was the culprit or the bad press over the last year, but women don't want Trump, whether for president or to wear on their bodies.

However, the Google trends for Ivanka Trump's brand shows it is steady, and when Trump tweeted out the link to the dress she wore during the Republican National Convention the dress sold out within hours. That said, she may have seen a hit if her Instagram account is any indication. Photos of her father and of other Trump supporters or of the family on the campaign trail have been overwhelmed with photos of her children and the clothes in the line. It also includes a video of Trump with her husband and children talking about their support for her when she feels like she fails. The pink Trump brand flashes across the screen at the end.

Public filings from Trump’s licensing partner G-III shows sales are up over the course of the year.

“Over the past year many more women have discovered and become loyal to the brand, leading us to experience a significant year over year revenue growth,” Ivanka Trump chief brand officer, Abigail Klem, told Fortune.

Trump's brand is available in 800 stores around the country, and the boycotters are urging people to boycott not just the brand but those that carry the brand as well.

When Shannon Coulter began the boycott campaign it was in response to the "Access Hollywood" video. Ivanka Trump came to her father's defense with a statement about how the video is absolutely not who her father is.

“If Ivanka Trump had distanced herself from the campaign I would not be boycotting her,” Coulter told The Guardian. “But something changed for me when that tape was released.”

It seems many women agree.