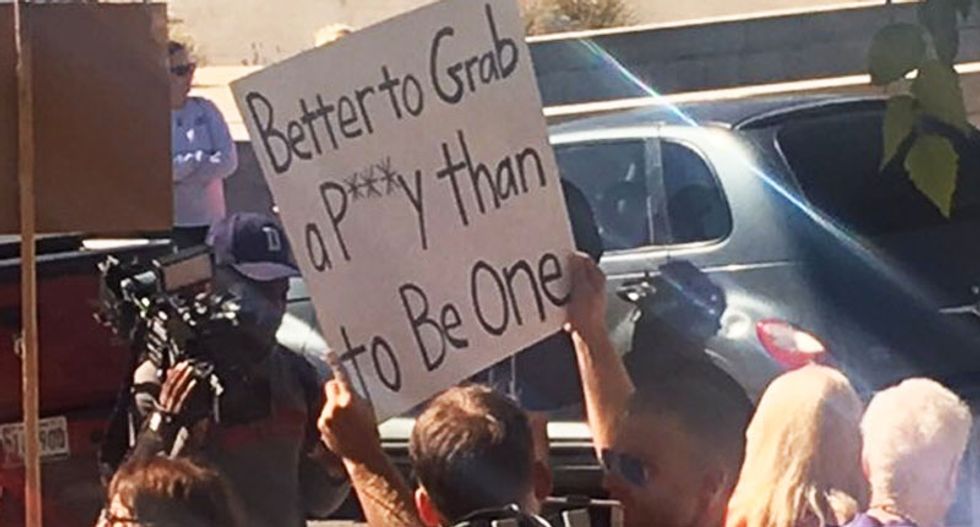 The internecine war between GOP presidential candidate Donald Trump's campaign and the leadership of the Republican Party burst into public view on Monday with Trump's Virginia state chairman getting booted from the campaign for heading up a protest outside the headquarters of the Republican National Committee.

However Trump partisans, egged on by Trump attacking Ryan on Twitter, showed up across the street from RNC headquarters holding signs and chanting.

In pictures posted online, one protester can be seen holding a sign reading: "Better to grab a p***y than to be one."

Showing that Trump still needs the support of the RNC just as much as Republican Party leadership fears overtly turning their back on their presidential nominee will be devastating come election time, the Trump campaign fired Virginia State Chairman Corey Stewart.

According to a statement from the campaign, "Former State Chairman Corey Stewart is no longer affiliated with the Donald J. Trump campaign" effectively immediately.

"Corey made this decision when he staged a stunt in front of the RNC without the knowledge and approval of the Trump campaign."

Embattled campaign manager Kellyanne Conway, added, "We have a tremendous working relationship with the RNC. Chairman Reince Priebus has been an engaged mad incredibly supportive ally to Mr. Trump throughout the campaign."

The stunt protest comes on the heels of news that REpublicans candidates were told to feel free to keep their distance from the toxic Trump if they feel he may hurt their reelection chances.