GOP official tries out novel defense of Trump 'p*ssy' comment: 'God can use him like he used the harlots' 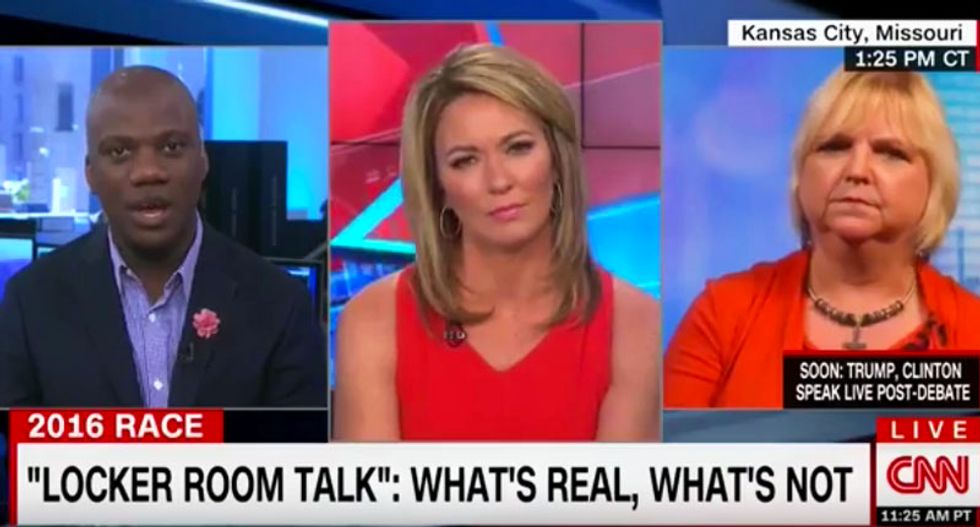 An ardent fan of GOP presidential nominee Donald Trump went biblical in her defense of the embattled candidate on CNN Monday, invoking the Bible and describing how God can use a man like Trump just like he used the harlots of old.

On a panel with host Brooke Baldwin and guest Shaun Harper, Vicki Sciolaro -- who is the Third Congressional District Chair of the Kansas Republican Party -- condemned Trump's "p*ssy" comments, saying she is a Christian and has never used words like that --  but America still needs a man like Trump.

“Look at the culture of our country. Everyone knew he had strip clubs, but still, the millions of people chose him to be the nominee,” Sciolaro explained. “And look at our culture, it’s filled with bars and strip clubs on every corner.”

As a stunned Baldwin looked on, Sciolaro added, "God can use anybody! He used the harlots! It’s all about what God can do. God can do this. God can use this man!”

The Kansas Republican also noted the sinful nature of the country under former President Bill Clinton and how it affected her children, stating, "When Bill Clinton was President, my children came home from school and they had no idea it was actually called the Oval Office. They thought it was called the Oral Office."