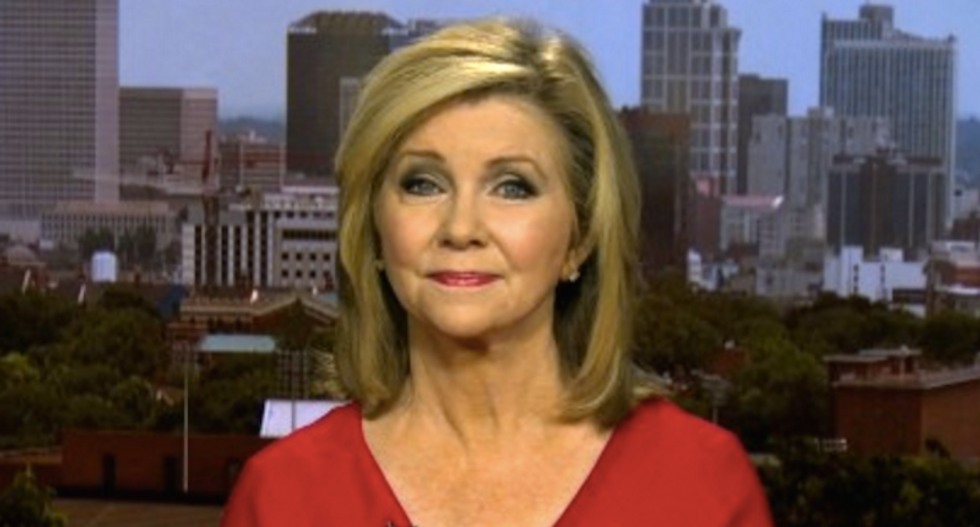 Rep. Marsha Blackburn (R-TN) thinks Donald Trump's casual boasts about grabbing women by the genitals are "indefensible" -- but she still wants to change U.S. Senate rules so he push through his agenda.

The Tennessee Republican said she could not defend those aggressively lewd remarks, but CNN's Chris Cuomo reminded Blackburn that she had defended Trump's comments "by proxy of supporting him to be president of the United States."

"You can't have it both ways, can you congresswoman?" Cuomo said.

Blackburn disagreed, saying she agreed with the Family Research Council's Tony Perkins -- who admitted he would trade his "shared values" for helping to pick the next U.S. Supreme Court justice.

"I agree with Tony Perkins -- I share the concerns," Blackburn said. "We have a binary choice here, Chris. You're going to have one or the other as president of the United States. They are both flawed candidates."

Blackburn launched a lengthy attack on Hillary Clinton's record on health care reform, and Cuomo asked her to specifically identify what made Trump the better candidate to improve the quality of health care.

"What did you see on that stage (Sunday) night that makes you proud to say vote for him, he can get it done?" Cuomo said. "Was it him basically saying that he would unilaterally put Hillary Clinton in jail for what he doesn't like about her email situation? Was it him saying he would force companies not to leave by passing a tax -- the first president to ever pass a tax, because it's your job in Congress? What gives you that confidence?"

Blackburn tried to change the subject back to Clinton's record, but Cuomo again challenged her to defend her Trump endorsement.

Cuomo reminded her that Trump had just called GOP congressional leaders "a bunch of hypocrites," but he pointed out that polls suggest Democrats may regain majority control of the Senate.

Blackburn then said Senate's cloture rules should be changed so it would be easier for a GOP minority to repeal the Affordable Care Act and pass other legislation backed by Trump, if he's elected.

"Let's get rid of that 60-vote rule in the Senate, so that we can get things to the Senate floor and call an up-or-down vote," Blackburn said, referring to the rule that allows senators to end debate on a bill if 60 of them agree to bring it up for a vote.

Cuomo asked how Obamacare could be repealed if Republicans didn't have enough votes to overcome a Democratic majority.

"It's time for those senators to stop hiding in the high grass," Blackburn added. "They can say, 'Well, we just can't get 60 votes, so we're not going to be able to get something to the floor.' Let's challenge the senators, put it on the floor."