'He has no idea what sexual assault is’: Kayleigh McEnany ripped for backing Trump smear of adult star 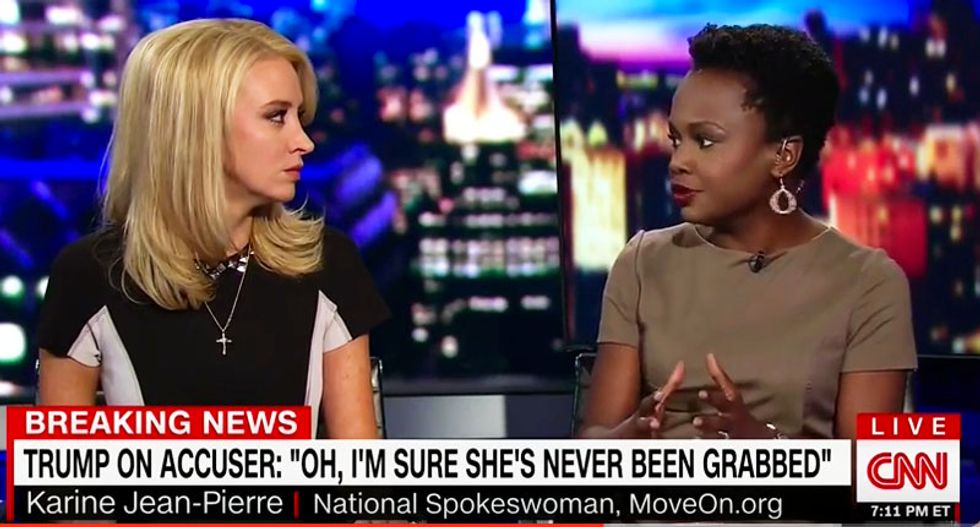 Donald Trump advocate Kayleigh McEnany was relatively subdued Monday afternoon after receiving a lecture on what consent means when she attempted to defend his latest comments about an adult film star who alleged he groped her.

Following revelations from Jessica Drake, who accused Trump of grabbing and offering her $10,000 for sex, the GOP nominee told an interviewer: "Oh, I’m sure she’s never been grabbed before.”

Addressing the flood of women who have accused him of sexually assaulting them, Trump added, “These are stories that are made up, these are total fiction. You’ll find out that, in the years to come, these women that stood up, it was all fiction. They were made up. I don’t know these women, it’s not my thing to do what they say. You know I don’t do that. I don’t grab them, as they say, on the arm.”

Asked about Trump's comments, McEnany attempted to diminish them.

"I heard this as buttressing the early part of the argument which is, 'I never did this, I don't know this woman,' in the end saying, 'I'm sure she's never been grabbed before,'" McEnany said before adding, "I really think this is much ado about nothing."

Given a chance to respond, MoveOn spokesperson Karine Jean-Pierre, lectured the Trump spokesperson about the big picture when it comes to her boss and his treatment of women.

"I think it's clear Donald Trump has no idea what sexual assault means," she began. "Which is incredibly dangerous for someone who wants to be president of these United States."

"I mean, look, one in five women are affected by this," she continued. "And for him to say that, all it does is opens up old wounds and it's not new, right? He showed he didn't understand sexual assault when he made those comments after the Access Hollywood tapes. He showed he didn't understand sexual assault after these 11 women or 12 women have come out now, made these allegations. And now he's showed it again today. Honestly, as a woman, it's incredibly insulting and it's disqualifying."