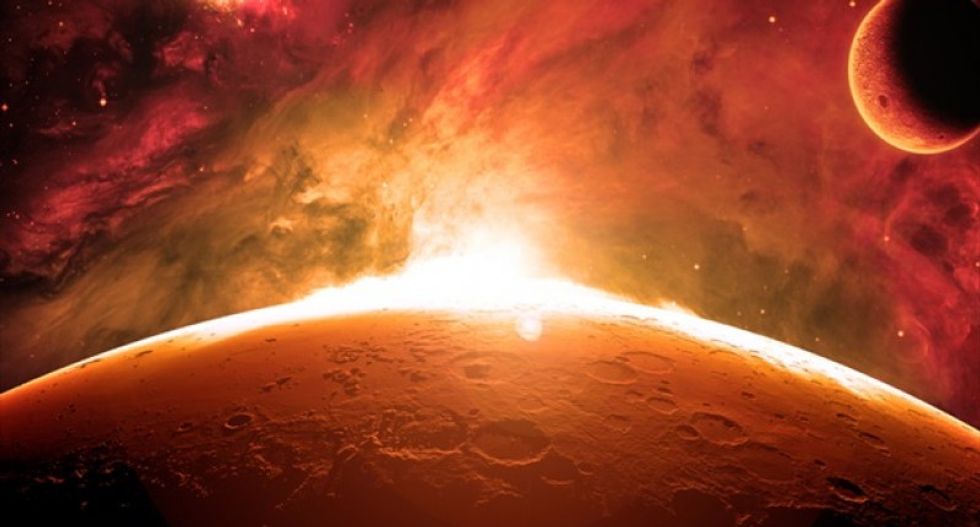 The Surface of Mar - Shutterstock

Elon Musk announced earlier this week that  he intends to send a mission to Mars as early as 2022. The mission will be called "Heart of Gold," in honor of the late, great Douglas Adams, and his classic work, The Hitchhiker's Guide to the Galaxy. Musk envisioned that the initial voyage could carry up to 100 people, but that there is a "high" chance that participants could die during the mission.

The Guardian, a British newspaper, asked its readers if they would be willing to risk their lives for the chance to go to Mars. The results are interesting in that the people who responded in the affirmative seemed to share two characteristics: they were largely male and largely American, at least based on the responses that The Guardian chose to publish.

One of America's foundational myths is that of the "frontier," the idea of unexplored (by white folks) territory that is open to settlement, where a person can stake a claim. Whether it was fulfilling "Manifest Destiny" or following newspaper editors' commands to "go west, young man," white men were pushed to move outward, to claim land for themselves, and in so doing, to expand the American nation. So, is going to Mars just a new form of vestiges of Manifest Destiny?

Here are some of the responses that were sent to The Guardian's editor:

A 28-year-old photographer from New Mexico doesn't want to "limit" his life, but also, of course, wants the opportunities to photograph the wonders of Mars.

A 59-year old IT manager from the UK, after detailing how he had followed the space program his entire life, and had dreamed of space travel since he was a boy, ended his answer with this:

"Today, it looks as though the possibility of travel to Mars might soon be here, optimistically within my lifetime. It’s a step which must be taken by the human race, regardless of the individual risk. If I died in the process, lessons will be learnt and progress will be made. If I lived to see Mars, it would be the single most amazing achievement of my life. How could I not take an opportunity like this?"

A 32-year old transport planner from New Jersey placed his sacrifice in the context of human progress, while an anonymous 18-year old from North Carolina hopes to encounter alien life on Mars.

One of the responses that I resonated with, because his experiences echoed mine, was that of a teacher who talked about how small his students' worlds were, and how journeying to Mars might make their worlds larger. The number of Americans who never venture beyond their state lines is extraordinary: I taught many college students who had never left the Eastern Seaboard, and had never been to Canada, which was just 100 miles to our north.

Perhaps the most poignant answer comes from a 25-year old in Alabama, who would go to Mars for a chance not be part of an anonymous mass on Earth, but to be somebody:

"Mars, however, offers you the chance to be more than that. Much like the religious groups colonizing the new world, you have the opportunity to shape society with your very existence. The legends and culture of this future society will be influenced by your actions. You will be the people legends are written about, you might be the next Abraham Lincoln, people might tell tall tales of your hidden wealth or you might be known for your infamous villainy. You might be one of the men and women who throw off the shackles of oppressive companies or you might be one of those who ensured their hold and success. Even if you’re never directly attributed to anything, even if you live a quiet life. The way you lived, your attitudes, the culture you helped create, your political leanings, all of that will contribute to an ingrained memory in this new society. You will be one of the people who helps shape the identity of a whole new society, and the opportunity to be part of that is worth the risk of dying on the way there."

As for me? There are things that keep me bound to Earth: my emotional attachments to the people I love, mostly. But I know that dying is not the threat that would keep me from going. I'm not afraid to die, only because I realize that death is inevitable, and if I'm going to die, why not go in the midst of a great adventure? The chance to see for myself the Hesperian volcanoes and the Amazonian river beds draws me.

The word, "cosmos" comes to us from the Greek for "order,"  and for me, peace and solitude are what I find when I am able to get "right-sized" in the universe, that is, when on earth, for example, I'm standing next to a Doug Fir, and realize how small I am, or standing next to a 14,000-foot peak and realize I'm an ant. That's when I feel most in awe and quiet. I would love to experience that in the infinitude of space, and it seems to me, it might be worth giving up a noisy live on Earth to experience that.

The complete answers can be read here.

Tech News Media Science
Report typos and corrections to: corrections@rawstory.com.
Like this article ? Text `Support` to 50123 to donate.
READ COMMENTS - JOIN THE DISCUSSION