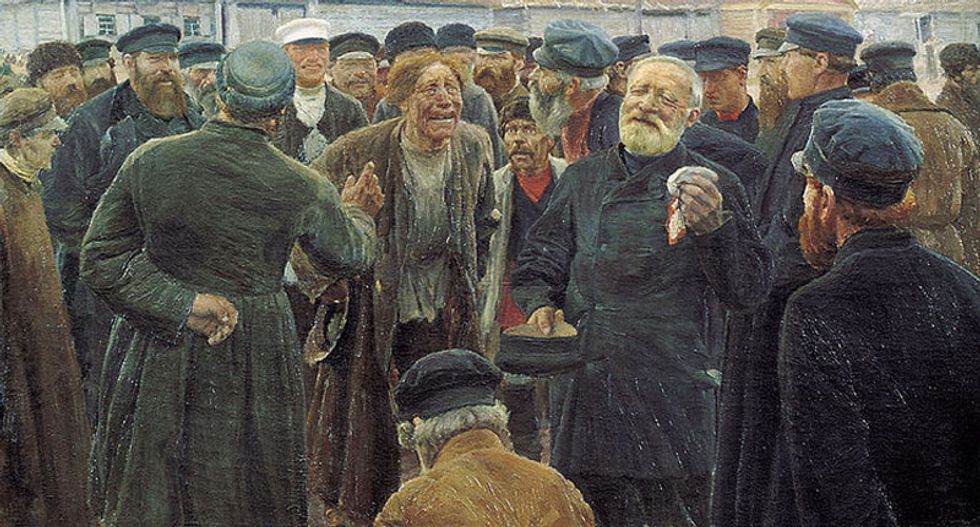 Sergei Korovin, A Gathering of the Mir

‘When the people are being beaten with a stick, they are not much happier if it is called the People’s Stick.’

Populism is in the air: it’s the topic of the moment, the subject everybody wants to discuss, to dispute, to praise, or to loathe and condemn. Journalists and scholars understandably concentrate on the American and European cases (Trump, Le Pen, Hofer and all that), yet much can be learned about populism from elsewhere, and by examining carefully its history.

Russian populism is an important case in point. Born during the 1860s, populism in that country remains interesting and important, for several reasons. It highlights the way populism is a species of political hypnotism whose talk of “the people” turns real, breathing and blinking people into a phantasm. The Russian case reveals as well why populism has a close affinity with violence, and why intellectuals, who should know better, are often prone to develop an aesthetic fascination for the subject, and the substance, of populism. Finally, and of great importance in making sense of the contemporary grip of Putinism, the Russian case shows that the language of populism, for all its talk of the urgent need to pit the people against the political establishment, can be absorbed by osmosis into the structures of government. In doing so it enable those who govern to rule in the name of “the people”, who become the victims of state power.

The Russian case also reminds us that the ideology of populism is seductive because it has “democratic” qualities. Known locally as narodnichestvo, 19th-century Russian populism was the local substitute for American, British and French-style representative democracy. Russian populism, defended by an intelligentsia that considered itself the only free beings in a political order of slaves, called for Russian unity and government through the Russian people, in opposition to the combined power and authority of the Tsar, the Church and the landed nobility. Populism was born not simply of a bad local reaction to the revolutionary ideals of “representative democracy” that Napoleon’s troops had tried (and failed) to impose by force on the Russian lands. Russian populism registered and absorbed those ideals by acknowledging that the commoners were no longer to be treated like scum. It praised them and spoke constantly of the narod (“people”, “folk”) and the “people’s will”.

Buried deep in the politics of populism everywhere is simple mindedness, the worrying urge to deal with the complexity of the world through wilfully simplified formulae. The Russian case was among the earliest examples. It thrived on a metaphysical, almost apocalyptic presumption: that a clean revolutionary break with the past was both necessary and possible, and that popular upheaval would result in the abolition of dehumanising power structures. This upheaval would be followed by a cleansing, a clarification of the true nature of things which would lead, finally, to full human emancipation.

Populists emphasised the people’s rustic, tellurian qualities. Russian populists generally disliked industrialisation. They were not friends of technical progress, and rejected as false the whole modern idea of the liberation of humanity through the domination of nature driven by markets and science. The populists saw no need for representative mechanisms, for they thought of themselves as bearers of the unchanging essence of the Russian people. That is why state-organised capitalism guided by parliamentary democracy was for them a miserable chimera, an unworkable fantasy that was bound in practice to produce delusion and unhappiness, founded on slavery.

What then was the political alternative? Russian populists were often at their own throats; no generally agreed vision surfaced. Although they dominated the opposition to czarism during the second half of the nineteenth century, especially from the 1870s, the populists never formed an organised political party and refused a coherent doctrine. It was a movement comprising various organisations and factions, including the anarchists, the Nihilists and the Social Revolutionaries. Their ranks contained regicides, anti-capitalists, and eccentric figures, like Petr Tkachev (1844-1886), who reportedly urged the rebirth of Russia by eliminating every person over the age of 25 years. The populists suffered frequent political setbacks, as in the summer of 1874, when peasants failed to embrace their ascribed role as “the people” by handing student populist agitators clad in peasant clothes over to the Tsar’s police. The harsh realities of czarism nevertheless kept them going, at times united, above all in their emphatic rejection of monarchy and “bourgeois” representative democracy.

Russian populists typically described themselves as “apolitical”, meaning that they had no truck with plutocracy, petit-bourgeois or bourgeois electoral politics and its corresponding fantasy of taking up seats in a parliament. Populists put their faith in a new revolutionary subject - the peasants and small producers - and they were convinced that Russia could leapfrog the age of industrial capitalism and representative government. The typical populist was a Janus, V.I. Lenin wrote, “looking with one face to the past and the other to the future”. Most populists embraced a version of Aleksandr Herzen’s alternative - originally mediaeval - vision of the natural harmony of the mir, the free association of peasants, empowered periodically to redistribute arable land and through its decisions granting each and every peasant an equal say in determining how to live their lives as equals. Populism stood for the protection of the people in the mir by the mir. It imagined the new Russia as a decentralised confederation of self-governing units, as a new type of post-democracy freed from the evils of serfdom, industrialism, capitalism, and the violence of the territorial state.

The point was to change the world by upending old Russia. Tens of thousands of young populists heeded the call (first spelled out in 1868, in a famous article by Mikhail Bakunin in the émigré journal People’s Cause) to “go to the people”. Others known as Jacobins drew the conclusion that “the people” were incapable of liberating themselves. It followed from this that, since their role could only ever be that of a negative, destructive force, the people needed, as a lion needs a tamer, strong leadership provided by a tightly-organised vanguard that would help fashion revolution out of the chaos sparked by popular uprisings. Then there were populists who were so convinced that the Russian state (as Petr Tkachev explained) was “suspended in thin air” and “absolutely absurd and absurdly absolute” that its rulers deserved assassination.

Their first two attempts to kill the Tsar and the czarist system with one violent blow - a plot to blow up the emperor’s train, and an explosion in the Winter Palace prepared by Stepan Khalturin (1857 - 1882) - failed.

It was third strike lucky. On March 1st 1881, a bomb thrown by the Russified Pole Ignacy Hryniewiecki (1856 - 1881), a member of the underground party called “The People’s Will” struck down and killed Alexander II. Many populists were overjoyed; but their spirits soon slumped. The regime of Alexander III arrested and executed five accomplices (Hryniewicki was killed by his own bomb), flatly rejected calls for a freely elected National Assembly, then tightened the screws of repression. Populist violence fed despotism, followed by revolution, then yet more despotism. Russians were forced to wait in the queue for constitutional representative democracy - where they are still waiting, two generations later.

Arrest of a Propagandist (1892) by Ilya Repin

By John Keane, Professor of Politics, University of Sydney