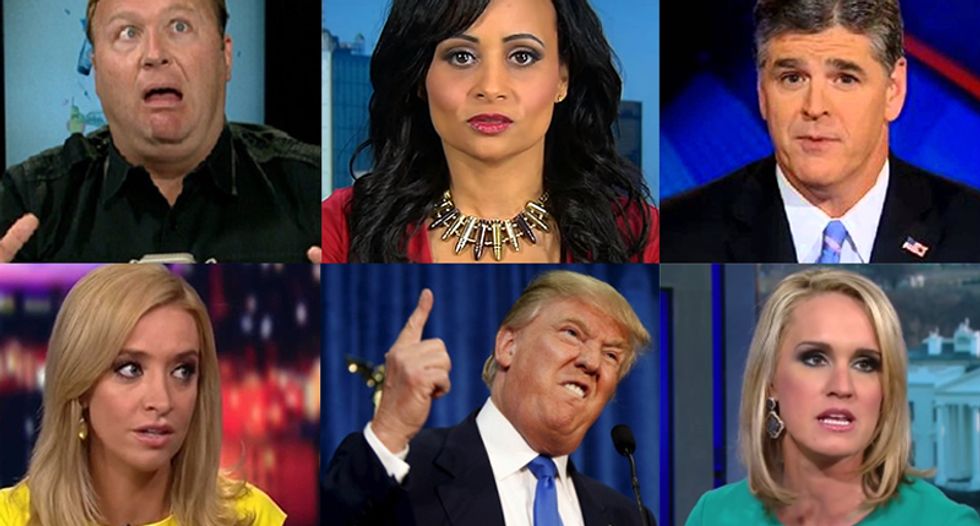 If the reports are accurate and Donald Trump's family is already plotting to start its own cable news empire after Trump loses the election in November, then our media landscape is about to get even crazier.

How much crazier, you ask? Given the standards that Trump's own presidential campaign has set, it's easy to imagine Trump TV as Fox News with even less editorial restraint. To give you an idea of just how deplorable this network could be, we've projected a weekday lineup based on Trump's most dedicated media followers.

6 a.m. - 9 a.m. -- Milo in the Morning: Breitbart writer Milo Yiannopoulos leads a dishy morning program that will quickly earn a reputation for being the "3 Hours Hate." Yiannopoulos's most popular segment is the one where he singles out a nasty social justice warrior who should be targeted for online harassment by his millions of viewers. The show also features "Hurricane" Katrina Pierson delivering weather forecasts... which are always wildly incorrect.

10 a.m. - 11 a.m. -- Rudy Awakening: Disgraced former New York Mayor Rudy Giuliani darkens up your morning by screaming into a camera for a straight hour about the Muslims who are about to slaughter you and take your children as sex slaves at any minute.

11 a.m. - Noon -- Lock Them Up -- Chris Christie's Crime Report: In this hour, disgraced former New Jersey Gov. Chris Christie will talk about all of the horrific crimes that the Hillary Clinton administration has been getting away with. It will be broadcast live from Christie's new home at the East Jersey State Prison.

Noon - 2 p.m. -- Afternoon Headlines With Alex Jones: The first straight news program in the lineup, Alex Jones will bring you the latest revelations on Hillary Clinton's failing health, as well as her connections to the demon lord Czernobog, who has been helping her stay alive via daily virgin sacrifices.

2 p.m. - 3 p.m. -- The Big Money Bros, with Donald Trump Jr. and Eric Trump: In this finance-focused show, the two oldest Trump brothers dish out their family's top secrets for getting rich, including inheriting wealth from a rich father, stiffing creditors, and evading taxes.

3 p.m. - 4 p.m. -- Beam Me Up, Scottie: Trump surrogate Scottie Nell Hughes gets an hour-long show to publicly shame anyone who has accused her boss of sexual harassment -- including former employees of Trump TV who were fired after complaining.

6 p.m. - 7 p.m. -- Tomi Lahren's White Grievance Hour: Tomi Lahren spends an hour talking about the most important issues of the day, such as why black people can get away with saying the n-word.

8 p.m. - 9 p.m. -- The K Files, With Kayleigh McEnany: The former top Trump surrogate leads an hour projection, simply by reading negative stories written about her boss and replacing the name "Donald Trump" with "Hillary Clinton." McEnany will be the first -- and only -- reporter to break the news of Hillary Clinton's conviction for her role in founding Trump University.

9 p.m. - 10 p.m. -- Hannity and HA-HA: Sean Hannity moves away from Fox News for a new show that will try to recapture the magic he once had with liberal co-host Alan Colmes. Balancing out the show from the left will be H.A. Goodman, a longtime Bernie Sanders supporter who now spends an hour agreeing with Hannity that Hillary Clinton is the single most depraved president in American history.

10 p.m. - 11 p.m. -- The Old Boys' Club: In this very special show, Howard Stern joins Roger Ailes and Donald Trump himself to share war stories about all the p*ssy they've grabbed over the years.