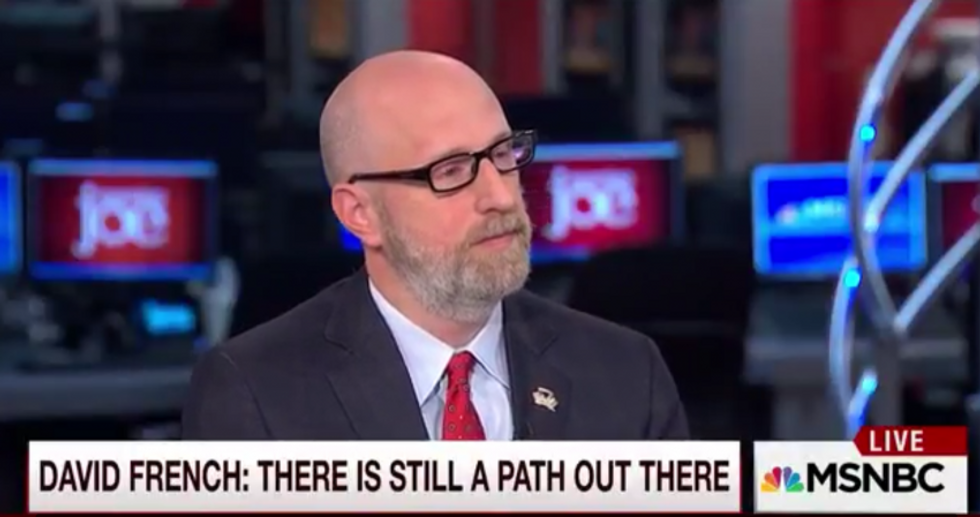 For the past year-and-a-half, the alt-right has used social media to viciously torment Donald Trump's critics on both the right and the left. National Review writer David French, who briefly flirted with launching his own independent presidential candidacy to challenge Trump, writes on Friday about the awful harassment he and his family have been subjected to over the past year.

In particular, the alt-right made a point to attack French's youngest daughter, whom his family had adopted from Ethiopia. You see, alt-righters view bringing in children of color to America as the ultimate betrayal of the white race, which is why they had particular scorn for French.

"I saw images of my daughter’s face in gas chambers, with a smiling Trump in a Nazi uniform preparing to press a button and kill her," he writes. "I saw her face photo-shopped into images of slaves. She was called a 'niglet' and a 'dindu.' The alt-right unleashed on my wife, Nancy, claiming that she had slept with black men while I was deployed to Iraq, and that I loved to watch while she had sex with 'black bucks.' People sent her pornographic images of black men having sex with white women, with someone photoshopped to look like me, watching."

And it wasn't just basement-dwelling 4Chan users sending abusive images at the French family, as one night his wife received a death threat from a pro-Trump veteran.

"The moment we landed back at home after I declined to run for president, she turned on her phone to see an e-mail from a Trump fan, a veteran who informed her that he knew the business end of a gun and told her directly that she should shut her mouth or he’d take action," he writes.

All this has taken a toll on him, and he says he's never been more depressed about being a public figure.

Read the whole essay at this link.