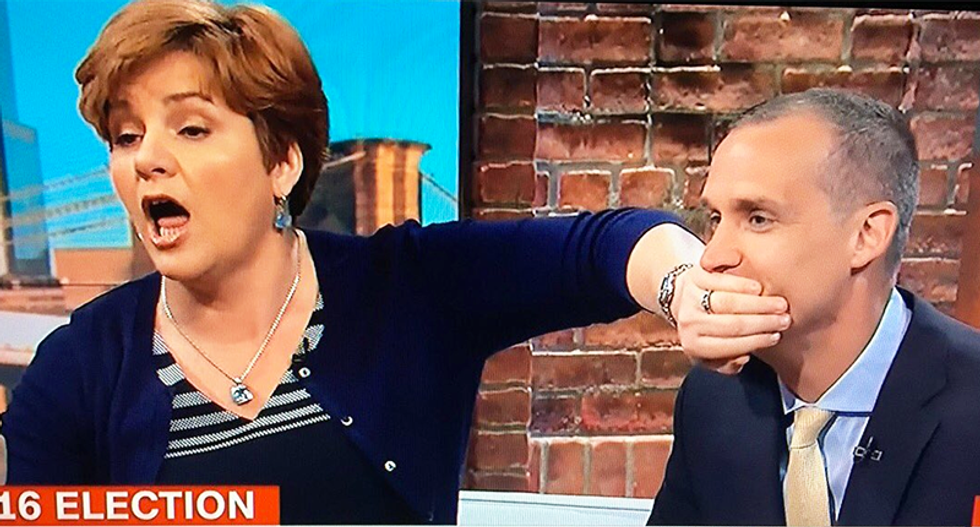 One thing about the 2016 presidential race is undeniable: Donald Trump has lied or misled at an unprecedented level. Over 70 percent of his statements, according to Politifact, are “mostly false,” “false” or “pants on fire false.” (Hillary Clinton is at 26 percent.)

His latest whopper – that the election is being rigged by a dishonest media and through ballot fraud – fed the news cycle for an entire week.

But while Trump scapegoats the media, he has served them well – at least, financially. Cable news organizations are expected to break records with US$2.5 billion in profits this election and spending on digital ads will reach $1 billion for the first time in a presidential campaign. NPR media correspondent David Folkenflik recently reported that CNN has earned roughly $100 million more than they’d anticipated during this election cycle – largely due to Trump.

With Trump’s poll numbers cratering over the past month, conservative media figures like Bill Kristol have tried to keep the top of the ticket from bringing down the GOP brand, calling Trump a “fluke” candidate and trying to shift the blame to the media for fomenting his rise – and nauseating lies – with billions of dollars in free coverage.

As a media scholar who has followed Trump’s “reality show” campaign and its impact on TV ratings and democracy, I would say there is, indeed, plenty of reason to blame the media players who have shrugged all the way to the bank.

More than just accounting for his rise, the profit motive in the digital media game has made it easier than ever before to spread false or defamatory information.

The media have always been eager to cover Trump, a playboy business magnate whose ventures endured wild ups and downs. He spent years on The Howard Stern Show honing his shock jock persona, bragging about his sexual conquests and insulting public figures. On “The Apprentice,” the louder he yelled “You’re fired!,” the higher his ratings soared. Audiences seemed to be drawn to his conspicuously cocksure authoritarian persona.

He also understands a basic tenet of for-profit media: The only “truth” is that you can’t be boring.

As Trump moved into the political arena, he beguiled old and new media into covering him by saying outrageous things – truth be damned – knowing that controversial statements draw immediate coverage.

In the wake of controversy, there’s usually a segment on cable news shows where a candidate or surrogate gets free air time to explain what they meant, followed by someone who refutes it. Analysts or op-ed writers will then devote time to denouncing the statement with attention-grabbing headlines like “15 Hours of Donald Trump’s Lies” (after Trump spent a day making stuff up about the Khan family) or “The Lies Trump Told” (a list of his biggest fibs).

The problem isn’t just that these articles keep the attention focused on Trump, reinforcing his chosen topics and frames for talking about them. It’s also been well-documented that the very act of trying to explain or denounce a lie can reinforce it.

We know from studies of how anti-vaccination myths spread that each time a telegenic spokesperson repeats a lie – even in a segment designed to correct it – it becomes more familiar to audiences. Paradoxically, because people tend to equate familiarization with truth, the more a lie is called out for being a lie, the more difficult it becomes to parse from the truth.

Digital media platforms exacerbate this problem because revenue models incentivize clicks over truth. In digital capitalism attention has been monetized. The more outrageous the statement, the more clicks it generates.

These days, even legacy media – newspapers like The New York Times or The Washington Post – follow the data buzz and cover whatever is trending. Trump has mastered using Twitter, a medium that suits his blunt invective rhetoric, to kickstart the misinformation feedback loop. He knows his colorful and misleading statements get retweeted by friends and foes alike – that writers and performers will react with ardent confirmation, denunciation or dramatic satire.

A team led by Oxford University professor Philip Howard has also been able to show that there are Twitter bots – fake accounts programmed to behave like impassioned supporters – promoting each presidential candidate during this cycle. But Trump’s army vastly outnumbers Clinton’s, with millions of tweets and retweets that have been programmed to include hashtags like #CrookedHillary, memes, photographs and links to hyperpartisan Facebook “news” pages like Eagle Rising.

With 62 percent of Americans getting their news from social media and 44 million reading it on Facebook pages, these bots can easily promulgate lies and half-truths, especially when users aren’t able to recognize the source.

Meanwhile, Buzzfeed recently wrote a lengthy report about how content producers of hyperpartisan Facebook pages are growing their audiences by eschewing factual reporting and using false or misleading information that simply tells people what they want to hear.

After fact checking over 1,000 posts from pages categorized as “right-wing” or “left-wing,” they found that 38 percent of the content on Trump-friendly pages like Freedom Daily – with 1.3 million fans – were either half-true or false. These phony stories, especially outrageous ones like the fable of Clinton’s “body double,” generate massive digital traffic that adds directly to Facebook’s bottom line. These pages are not flukes. Rather, as media writer John Herrman wrote in The New York Times Magazine, they are “the purest expression of Facebook’s design and of the incentives coded into its algorithm.”

Toward a new media ethic

A 2009 study found that commercialized media lower the political knowledge of viewers. The price we pay for a profit-driven media marketplace, it seems, is national ignorance.

Convenient untruths benefit their producers, no matter which side consumes or leverages them for fundraising. Everyone in the political information industry profits from the resulting suspicion, cynicism and outrage.

If Trump loses, the possibility of Trump TV looms; undoubtedly, it will serve the for-profit media a steady stream of ready-made rage. But we need to think hard about how to resist this “Trumpification” of the media.

There’s no easy answer. It would probably involve supporting structural reforms like nonprofit or public news alternatives. It would include ending the absurd practice of giving paid perjurers representing campaigns an opportunity to lie in the name of journalistic “fairness” – as if statements from the “spinroom” are ever uttered in good faith.

We need a new media ethic that ignores clickbait calumny, not one that gives bad faith actors a chance to repeat it. Journalists must resist reacting like Twitter bots. Rather than predictably repeating mendacious falsehoods that increase our ignorance, they should act as stewards of the public interest, choosing news content and media frames that add to our collective understanding.

It will demand denying serial liars like Trump the attention they so desperately need, leaving more air and space for truth to be heard.