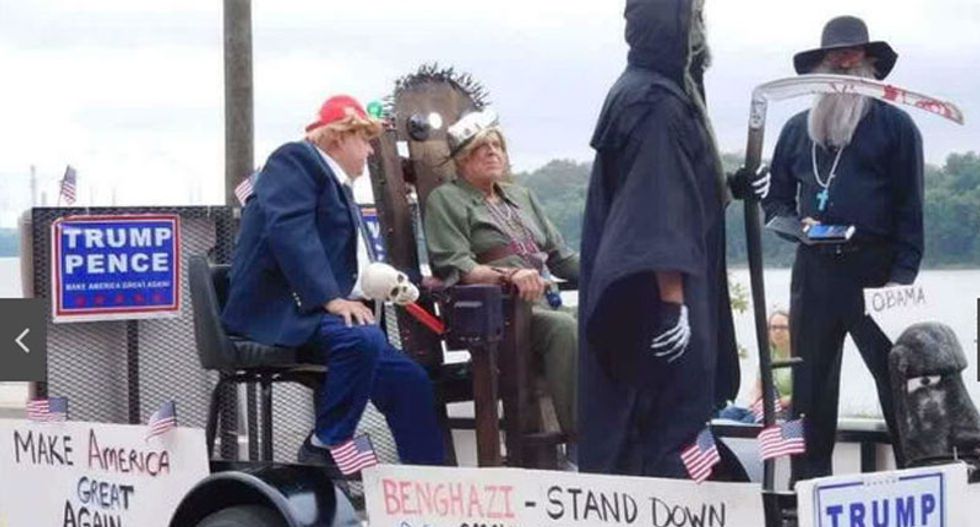 The small town of Aurora, Indiana is in an uproar after a local man entered a float in the annual Farmers Fair Parade depicting Hillary Clinton sitting in an electric chair with rival Donald Trump about to pull the switch.

According the creator of the float, which also featured a grim reaper and an Easter Island moai head in blackface labeled "Obama," he entered it in an effort to get laughs, reports WCPO.

"It definitely was all for laughter. We've always had floats for laughter," explained 76-year-old Frank Linkmeyer. "There's never been anything else but that,"w hwile denying there was anything racist about his creation.

According to one woman who was marching in the parade with her daughter's Girl Scout group, she didn't find anything about it funny.

“For us to be in 2016 and have our president depicted as an Easter Island statue in blackface, which doesn’t even make any sense, but it’s just racist as can be,” explained Jackie Reynolds. "“But knowing that we are marching alongside displays like this really makes me question whether or not we will be participating next year.”

Said local Penny Britton, who didn't attend the parade but saw pictures of the float after they were posted to Facebook, it was "disgusting."

“It instantly turned my stomach,” Britton stated. “One of the pictures shows children seeing the float go by and staring at it.”

In a statement from the Lions Club, which approves the floats, officials kept their distance stating, "the parade is a public venue which does not reflect the views of the Aurora Lions Club. As a member of a worldwide service organization, we are proud and standby our record of service to this community."

As for float designer Linkmeyer, he said he could have reversed Trump and Clinton, saying, "I could've taken and put Donald Trump in that float and had Hillary pull the handle. Nevertheless, I would have never pleased everybody and it was definitely all for laughter."

Linkmeyer did not explain how that would have meshed with the Trump/Pence or hand-written signs listing so-called Clinton "scandals."

As for the Obama statue in blackface, "We were getting ready to get in that parade and this thing was sittin' in front of this gentleman's building down there and they said, ‘Let's put that on there,’ and I didn't give it a thought," he attempted to explain.

Watch the video below via WCPO: