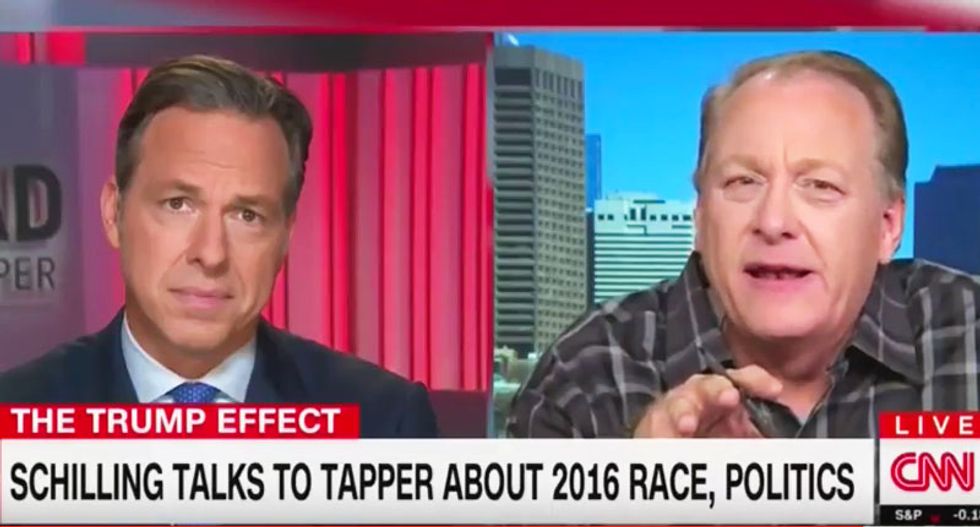 In a painfully awkward interview with former pro baseball player Curt Schilling, CNN host Jake Tapper explained that American Jewish voters don't all vote for Democrats and that they don't just vote based upon a candidate's position on Israel.

The former Boston baseball star announced this week that he will be running against popular Massachusetts Democratic Senator Elizabeth Warren in the next election cycle, and was invited on Tapper's show to talk about his political stances.

During the discussion, Schilling asked Tapper -- who is Jewish -- if he would be voting for Democratic presidential nominee Hillary Clinton.

After Tapper stated that he doesn't vote for president, the conversation turned awkward for the CNN host.

"Okay. So I want to -- I would like to ask you something about -- as a person who is practicing the Jewish faith, and has since you were young, I don't understand," Schilling began. "And this is -- maybe this is the amateur, non-politician in me, but I don't understand how people of the Jewish faith can back the Democratic Party, which over the last 50 years have been so clearly anti-Israel, so clearly anti-Jewish Israel, that it -- I mean, I don't know what else would need to be done, said, or happen for people to understand that they don't, they're not -- the Democratic Party is allied with Israel only because we have agreements in place that make them have to be."

Saying, "I don't speak for Jews," Tapper patiently explained to the former athlete that Jews think about issues other than Israel when entering the voting booth.

"I would imagine, just to try to answer your question, that one of the reasons many Jews are Democrats has more to do with Democrats' support for social welfare programs and that sort of thing, than it does for Israel," he explained

"And I know that a lot of Jews who are strong supporters of Israel do support the Republican Party, but again, I don't speak for Jews," Tapper continued.

"Right, no, and I know you don't. I know you don't," Schilling replied. "I just always find it a great conversation for somebody of your faith to -- because I want to understand the reasons behind some of those things, so I appreciate that."