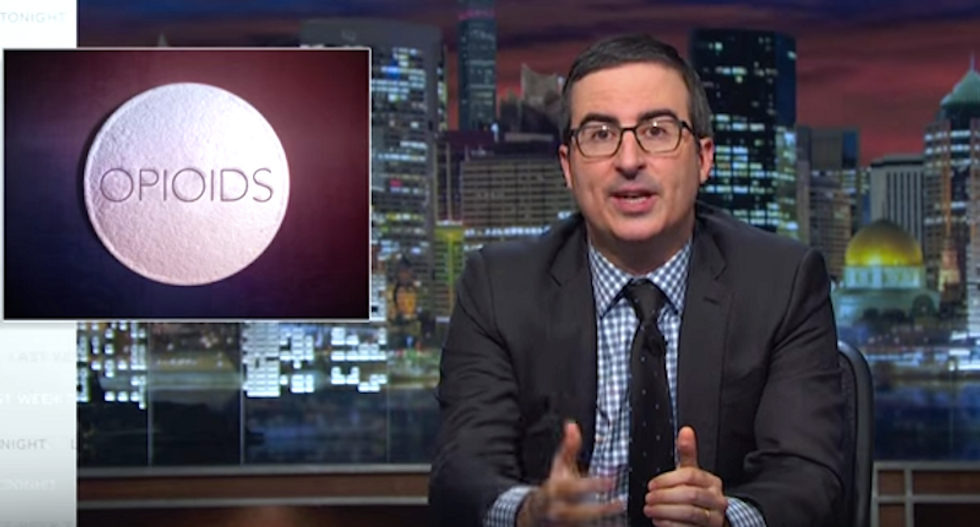 America's opioid epidemic is so pervasive that even dogs have overdosed on heroin, according to John Oliver.

The host of HBO's "Last Week Tonight" reported that the animal overdosed after eating a packet of drugs a passerby tossed over a fence outside a doggy day care.

“Rampant heroin abuse near a doggy day care is the first case that McGruff the Crime Dog is actually qualified to solve,” Oliver said.

About 2.6 million Americans are addicted to opioids, according to Oliver, and about 30,000 die each year from drug overdoses.

An estimated 75 percent of these addicts start first with prescription painkillers -- such as Oxycontin, Percocet and Vicodin -- but eventually turn to heroin because it's cheaper and more powerful.

Doctors have written more than 250 million prescriptions for painkillers, according to the U.S. Surgeon General.

That's a sharp reversal from the medical profession's long history of “opiophobia” -- which made doctors "excessively wary" of prescribing opiates for pain.

“That's not to be confused with Oprah-phobia, which is the irrational fear of screaming talk show hosts giving you a free sedan,” Oliver said.

The pharmaceutical industry worked to soften that resistance to open new markets for their painkillers, and Oliver blamed their deceptive marketing campaigns -- some of which eventually resulted in fines -- and the Federal Trade Commission for the deadly opioid epidemic.

"That discussion became dominated by the pharmaceutical industry, who started amplifying the message that opioids should not just be used for acute pain — from that of cancer or surgery — but all sorts of pain, like arthritis and backaches,” Oliver said.

Oliver singled out Purdue Pharma, which paid $634 million in 2007 to settle complaints about their shady marketing of Oxycontin, for its role in getting Americans hooked on opioids.

"But at a certain point, the question has to become less 'What did we do wrong?' and more 'What do we do now?'" Oliver said. "There is no one simple answer here."

Opioids are, in fact, the most effective way to treat certain types of pain, Oliver said, and alternatives are difficult to find, especially in rural areas.

“Alternative pain treatments should be at least as easy to find as Waffle Houses, which, like heroin, are both hazardous to your health and dangerously addictive,” Oliver said.

Any discussion about solutions cannot be dominated by the pharmaceutical industry which "put us in this f*cking mess" in the first place, Oliver said.

"That is like Chipotle going, ‘Have you heard of this fascinating new thing called pseudo-diarrhea? It looks a lot like diarrhea but it’s not diarrhea and the cure may actually be more tacos,” Oliver said.

These powerful and addictive drugs have a clear medical use, but Oliver said they must be more carefully administered and only if no other treatment is available..

"Not all opioid addicts will respond to the same treatments, and not all people in pain will find relief from alternative therapies," Oliver said. "This is going to take a massive effort and a significant investment — it won't be cheap, it won't be quick, and it won't be easy. And it is hard not to be angry at the drug companies, like Purdue, whose promise of cheap, quick, easy pain solution helped put us in this f*cking mess."