Joy Reid rips Trump advocate attacking Huma Abedin: 'Her only crime is being married to a creep' 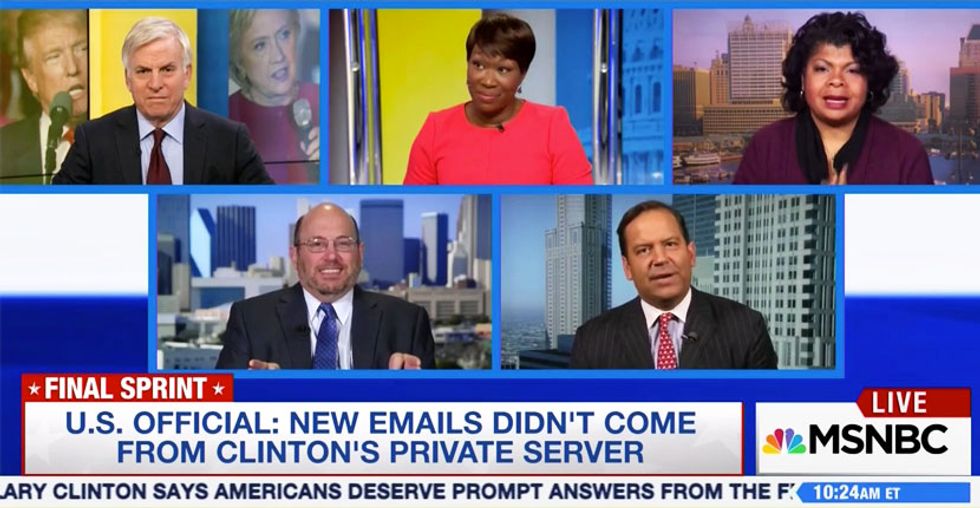 With FBI Director James Comey coming under withering criticism for his botched announcement of an investigation into emails found on Hillary Clinton aide Huma Abedin's personal computer, Trump advocates are attempting to make the most of the story before it withers away.

Appearing on MSNBC's AM Joy, Trump backer Steve Cortes attempted to turn a few emails -- that might be duplicates that have already been reviewed --  into a national security issue.

Host Joy Reid, along with the rest of the AM Joy panel, shot down the assertion with Reid warning that he was trying to "criminalize the mundane."

"Steve, I  know you have a job to do here as a surrogate," Reid began. "But if we are now criminalizing the mundane, at least in the minds of the public, casting an aspersion that, to the public can sound as if some crime was committed, when what we're really talking about is an aide to a politician printing  things out for her boss and unfortunately being married to a creep."

"That now becomes the basis to cast a broad, sweeping aspersion on somebody who can be president of the United States," she continued. "Politics only goes downhill from there, Steve. Is that the kind of politics you want to be a part of?"

"Well, look, we have to be careful," Cortes replied. "We don't know that a crime has been committed. I suspect, we don't known that --"

"You suspect? " Reid pressed him.

"When you say it's mundane. Let me tell you someone who doesn't agree, it's not from me or the Trump camp. Carl Bernstein of Watergate fame --" Cortes began as guest panelist Kurt Eichenwald began laughing. "He believes it's a bombshell."

Later in the interview it was suggested that the FBI should be investigating ties between the Trump campaign, with guest Joe Conason pointing towards former Trump advisor Paul Manafort.

When Cortes protested, saying, "He's not part of the campaign," Reid reminded him that Manafort used to be Donald Trump's campaign manager.