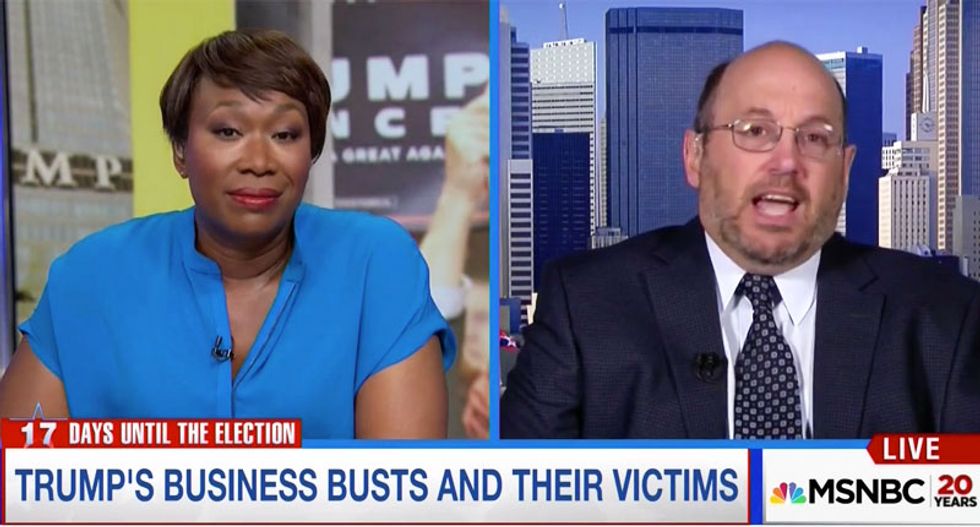 Appearing on MSNBC's AM Joy, Newsweek writer Kurt Eichenwald took apart the so-called "business genius" of GOP presidential nominee Donald Trump, saying he could be worth over $15 billion today if he spent his career mowing his lawn instead of playing businessman.

Speaking with host Joy Reid, Eichenwald was asked about Trump's image as a brilliant negotiator and businessman.

"The perception of Donald Trump, it's interesting how his persona has changed dramatically over the last 20-something years," Reid said. "It used to be his name was synonymous with wealth and success and now it's synonymous with the little Pepe the Frog meme and angry right-wing politics. If he's not a good businessman, how did he gain that reputation?"

"A large part of it is people not understanding business," Eichenwald explained. "I mean when you slap your name on everything, well, he must be successful, right? But, you know, the reality is that so much of what he's put his name on -- because he's been fantastic at marketing his name, that I'll give him -- it does have this branding element of, 'Well that it must be good.' But that's just PR. I mean this is a man that has had more corporate bankruptcies than probably any person in this country. And when he sells this story, which people buy into, that there was the whole element of The Apprentice, that was, 'Oh my career was devastated and then I built myself back,' well, the way he did it was by basically draining the cash out of a public company where they tried to salvage his casinos one more time, and he basically ripped off millions of small shareholders, the very kind of people who are Donald Trump supporters."

Turning to Trump's financial picture, the writer blew up the myth of Trump's business acumen.

"Here's how much money he had," Eichenwald continued. "You know this ting about a $1 million loan is an absolute lie. He had $200 million at one point in 1982, and if Trump had done nothing but stick the money in a stock index fund and mow the lawn until today, he would be worth almost $15 billion. His lie about him being worth $10 billion is based on pretending he has no bank dept. He is worth about $3 billion. What that means is Donald Trump's business genius lost him somewhere in the realm of $12 billion."

'And, in the process of losing $12 billion, he left millions of victims and destruction everywhere," he concluded.