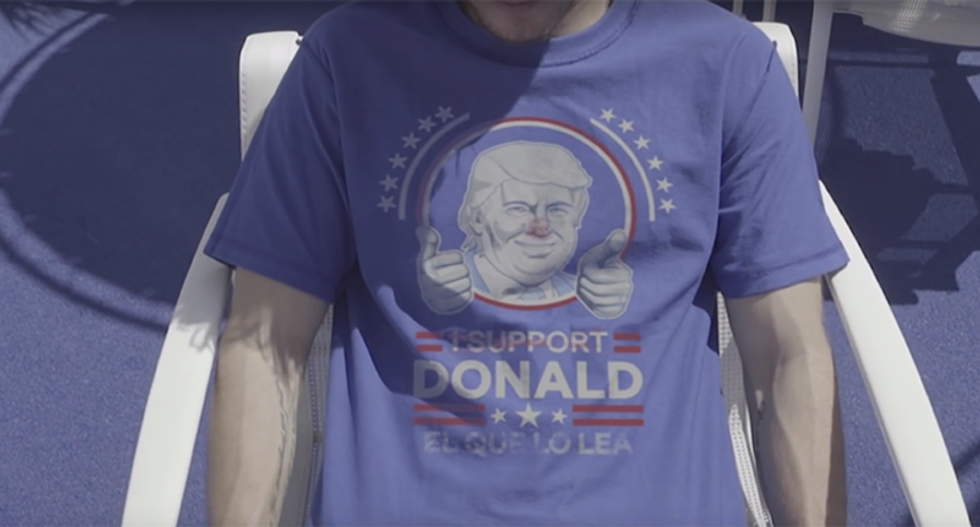 Mexican craft brewery Cerveza Cucapá launched a hilarious campaign — not for a wall but for beer — and "Donald Trump is going to pay for our beers," they say.

A Spanish-language video was published during the first presidential debate, showing a man who traveled to Los Angeles and sold Trump T-shirts to unsuspecting Trump supporters. While the shirt read “Donald el que lo lea,” and showed the Republican nominee in a clown nose, no one noticed it was mocking Trump. The phrase is a variation of a well-known Mexican saying that only Mexicans and Mexican-Americans would understand.

Cucapá founder Mario García explained to Vice that the campaign came from Trump himself, who has claimed that Mexico will pay for the wall on the U.S. border. "Well, Donald Trump is gonna pay for our beers, even though he doesn’t know it yet," García said.

While getting Trump himself to cough up the cash proved more difficult, their T-shirt trick worked wonders on the Venice Beach boardwalk, along Hollywood Boulevard and Huntington Beach.

The first sale on video shows García sitting next to an old white man at a bus stop. He asks who the man, "Are you a Donald supporter?" The man says that he is, and snags a T-shirt.

The plan worked, except with the police, who seemed to have problems with T-shirt stand and further that García was filming interactions.

The border issue has always been something that the brewery has talked about. Founded in 2002, their first location was in Mexicali and gets their name from the indigenous Cocopah tribe, that settled on both sides of the U.S. and Mexican borders.

“At Cucapá we’ve always carried the theme of the border in our DNA, so it was very natural for us as a brand to want to do something about Trump,” García said.

Check out the video showing the T-shirt sales below: