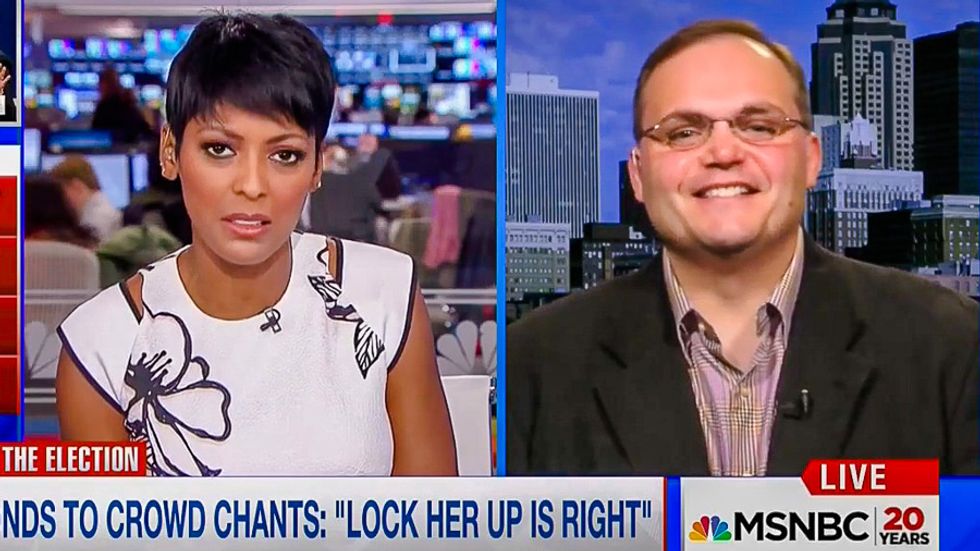 During a Tuesday discussion about how Republican leaders were fleeing from Donald Trump, Deace couldn't help but laugh when MSNBC host Tamron Hall noted that Scarborough still believed that the GOP nominee could win.

"Joe Scarborough believes that there is still a chance for Donald Trump to potentially pull this out," Hall noted, prompting a guffaw from Deace. "You have so many people looking for the next Wikileaks, whether supporters believe that these are doctored emails or not, that this could still hover over Hillary Clinton."

"I just kind of laughed at the mention of Joe Scarborough," Deace explained. "He turned his show into a Trump super PAC for six months and is one of the reasons in we're in this position."

"No, he doesn't have a chance," the radio host added. "What is going on now is he's had access to the Republican Party voter vault, Tamron, for six months. He's got every right-of-center consumer in America. He's got all their information. This is about starting the next alt-right platform in an attempt to essentially disintegrate Fox News now that he's got Roger Ailes and Steve Bannon on board. That's what is coming next. This is not a strategy for victory, this is a strategy for marketing."

Although Morning Joe has been critical of Trump in recent months, Scarborough and co-host Mika Brzezinski faced enormous criticism earlier this year for their cozy relationship with the Republican candidate.

"Even somebody like a morning show host plays a role — at least a quasi-journalistic role — plays a role in setting the parameters of the national conversation around these candidates," Zurawik told CNN. “You shouldn’t be so involved with them that you’re going down and giving them [debate] tips... It shows how unashamed Scarborough is, how proud he is of the fact that he’s in the tank for him.”