‘One of the most stunning things I've ever heard’: CNN’s Tapper blasts Trump on #DebateNight 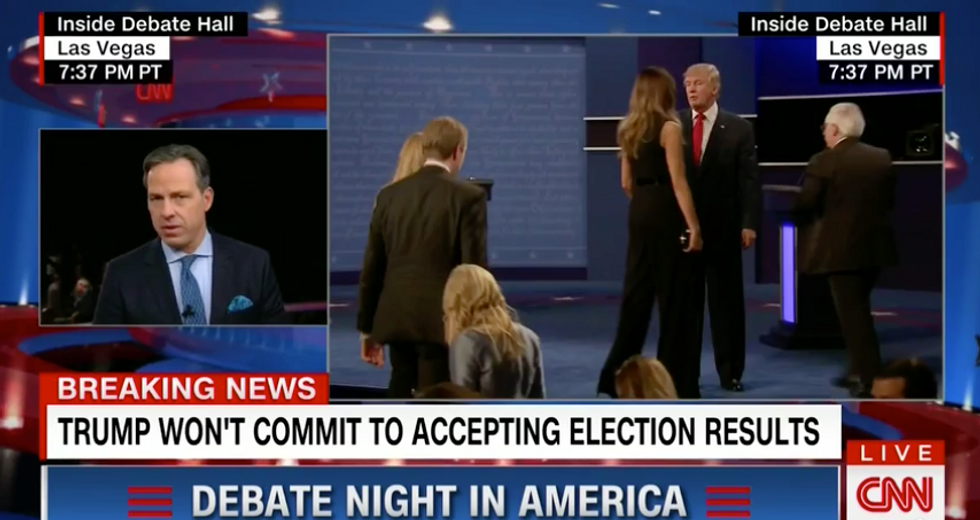 During Wednesday night's final presidential debate, Republican nominee Donald Trump did not say whether he would accept the results of the 2016 Election if he lost. In fact, echoing his sentiments in recent weeks, Trump said, "I will look at it at the time," adding "I will keep you in suspense."

Even Democratic nominee Hillary Clinton suggested his response was "horrifying."

Following the debate, CNN anchor Jake Tapper spoke to the dangers of not accepting the election results. Tapper called it, "one of the most stunning things I've ever heard in a presidential debate ever."

Trump's dangerous narrative that the election is rigged, that there is widespread voter fraud, and that the media is "rigged," is both reckless and problematic. He is essentially setting up his loss as one that has the potential to cause serious damage to the Democratic process.

Tapper continued, "Yes, [Trump] had some good moments, especially when it came to criticisms of [Clinton] and her policies and President Obama's policies. But to suggest that he is not going to necessarily accept the results of the nomination, that was a disastrous answer."

Check out Tapper's statements in full below.