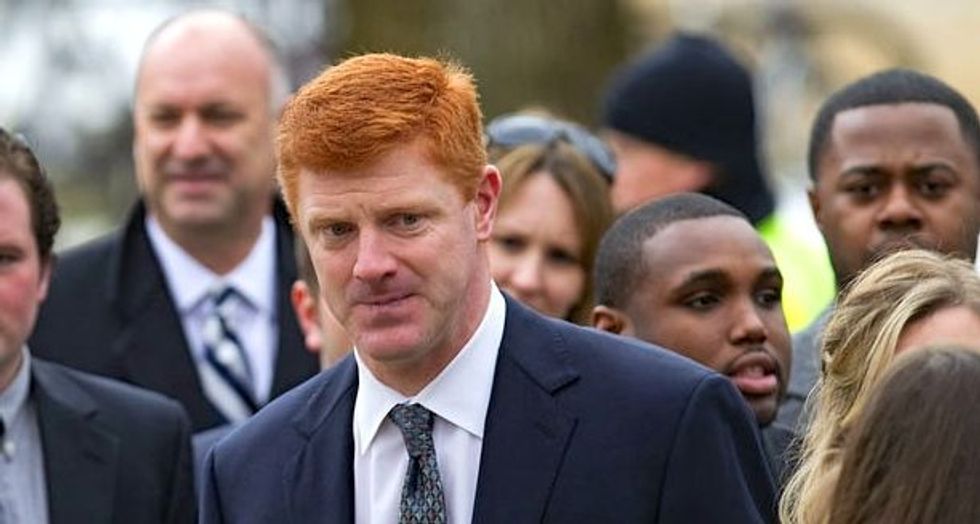 Mike McQueary lost his job on Penn State's football staff due to his own shortcomings and public revulsion that he failed to stop former assistant coach Jerry Sandusky from molesting a boy and not in retaliation for testifying against Sandusky, a lawyer for the university told jurors on Monday.

The jury in Bellefonte, Pennsylvania, heard opening statements in McQueary's lawsuit seeking more than $8 million in damages from Penn State over his 2012 termination, the latest legal development in a scandal that has sullied the university's reputation.

Penn State attorney Nancy Conrad told jurors in the trial that McQueary's termination had nothing to do with his testimony against Sandusky, who was tried and convicted in 2012 of 10 counts of child sexual abuse.

McQueary's lawyer, Elliot Strokoff, said in his opening statement that McQueary has earned less than $10,000 since his dismissal as an assistant football coach. Since then, McQueary's marriage fell apart and he moved in with his parents in State College, home of Penn State's main campus, Strokoff said.

The lawsuit by McQueary, 42, against Pennsylvania State University over what he portrays as retaliation, defamation and misrepresentation is being heard in Centre County Court of Common Pleas.

Conrad said McQueary's inability to find a job since his termination reflected public revulsion over "his decision to leave a young boy in the shower with Jerry Sandusky."

McQueary's later removal as a coach was in part for his own safety, Conrad said, suggesting McQueary could have been the target of violence if he remained in his job at Penn State.

Even so, she said McQueary's suit is an employment dispute that had nothing to do with the Sandusky case. McQueary was a mediocre coach whose only experience was with fired head coach Joe Paterno's team, which has hurt his employment prospects, she said.

In addressing the issue of his client's behavior in the 2001 shower incident, Strokoff said McQueary made Sandusky aware he was there to stop the assault but concedes he did not confront the long-time former coach, who had retained visiting privileges on campus after his retirement.

Sandusky, though no longer an assistant coach at the time, was still a revered and powerful figure at Penn State.

In shock, McQueary went home to ask his father what to do, his lawyer said. The next day, McQueary told Paterno, who in turn reported the incident to athletic director Tim Curley and Gary Schultz, a university vice president.

Curley, Schultz and Paterno assured McQueary that something would be done about Sandusky, Strokoff said, but no one reported the incident to the police until years later.

"The intent was to sweep things under the rug," Strokoff said.

Penn State has been accused of covering up Sandusky's conduct to protect its reputation.

Sandusky was arrested 10 years after the shower incident and is currently serving 30 to 60 years in prison.

Curley and Schultz are still facing criminal charges in the alleged cover-up of the abuse and will not testify in the trial of McQueary's suit, Conrad said. Paterno was dismissed by Penn State in November 2011 and died two months later.

(Editing by Frank McGurty and Will Dunham)